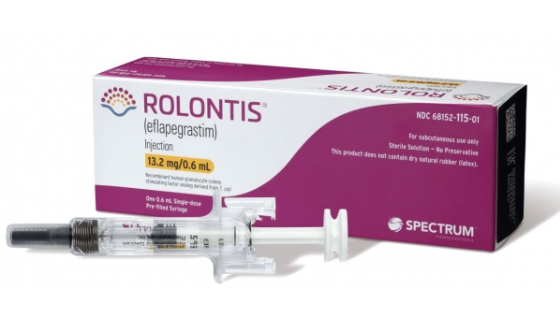 South Korea’s Hanmi Pharmaceutical has received marketing authorization for Rolontis (eflapegrastim), a long-acting neutropenia drug, as the country’s 33rd novel therapy from the Ministry of Food and Drug Safety, raising expectation for similar approval in overseas markets, the company said on Thursday.

The drug is indicated for the treatment of neutropenia, an abnormally low concentration of neutrophils (a type of white blood cell) that help the body fight infection. It is often induced by chemotherapy among cancer patients.

In 2012, Hanmi Pharmaceutical signed a licensing agreement to grant exclusive development and marketing rights over Rolontis to its U.S. partner Spectrum Pharmaceuticals for global markets except Korea, China, and Japan.

Hanmi and Spectrum are currently working together to launch the drug in the U.S. The FDA’s pre-approval due diligence for Hanmi’s manufacturing site in Korea is due in May. The neutropenia care market is valued at some 80 billion won ($70.6 million) domestically and some 3 trillion won globally.