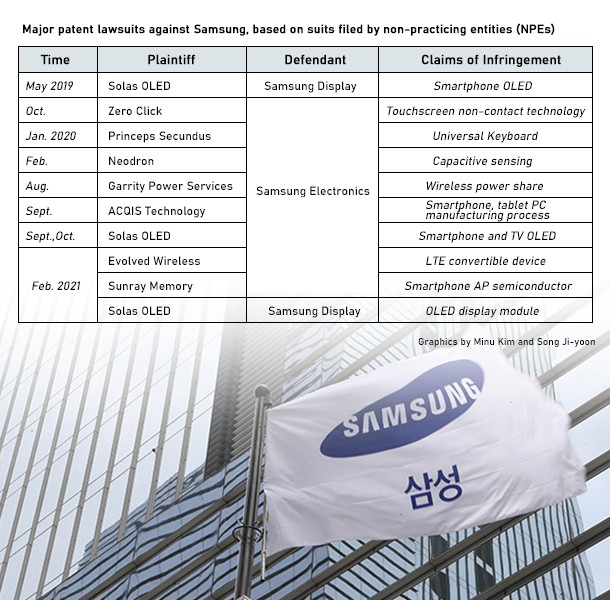 Solace OLED, an Irish patent management company filed a patent infringement lawsuit against Samsung Display in the Texas Western District Court on Feb. 26, claiming that the Korean display maker infringed on its patent on an OLED display module supplied to Apple.

In May 2019, the U.S. patent troll filed a lawsuit against Samsung Display and the U.S. subsidiary of Samsung Electronics with the Texas Eastern District Court and the U.S. International Trade Commission (ITC), respectively. The two trials are in progress now. Solar OLED dropped the ITC lawsuit in November last year and re-pursued in December after additional evidence collection.

On Feb. 23, Sunray Memory which belongs to the same group as Solas OLED, filed a lawsuit against Samsung Electronics’ Korean headquarters and U.S. subsidiary in Texas Western District Court, claiming that its patents were stolen in relation to the driving technology of Qualcomm’s Snapdragon SoC chip mounted on Samsung’s Galaxy S20 smartphone and the NAND flash technology applied to the Galaxy S10 series.

On Feb. 1, Evolved Wireless, an Austin, Texas-headquartered company, filed a patent infringement lawsuit against Samsung Electronics with the ITC and the Texas Eastern District Court.

Industry sources said there are 100 types of products related to patent infringement claims, which include Samsung smartphones, tablet PCs, and smart watches.

Another source pointed out that it is a structural problem that the patent trolls continue to attack Samsung. As in the past lawsuits between Samsung and Apple, manufacturers have no choice but to refer to technology from each other in the process of their product and service development, making it difficult for either party to gain an advantage unilaterally. The situation is different when it deals with a patent troll that has only patent rights and no production activity.