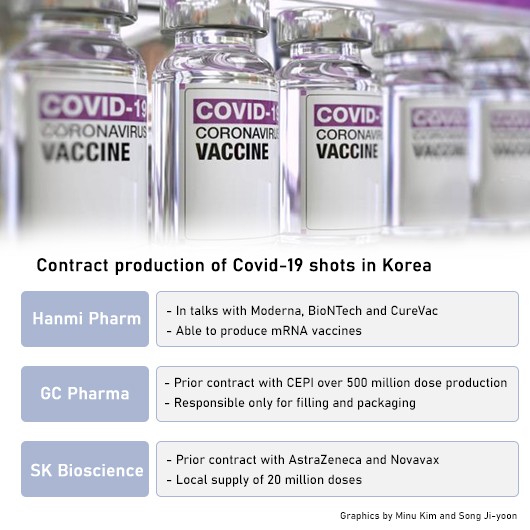 이미지 확대
Even as companies decline to comment or confirm, investors are betting strongly on Korean drug makers Hanmi Pharmaceutical and GC Pharma on the prospects of their consigned production or packaging of Moderna’s Covid-19 vaccine at least for the Korean supplies.

Their shares have been on a roll since Moderna late last year confirmed Korean procurement of coronavirus vaccine doses for 20 million people to South Korea for delivery starting May.

Unlike traditional vaccines that contain either weakened viruses or purified signature proteins of the virus, mRNA vaccine delivers genetic material mRNA that encodes the viral protein to induce immune reaction in the human body. It is known to have fewer side effects but there are few plants to manufacture this new technology vaccine across the world.

In 2018, Hanmi completed a 20,000-liter cell culture and purification system at Pyeontaek, which is the only facility to enable mRNA vaccine production not only in Korea but also in Asia. The Pyeontaek plant is now able to churn out up to 1 billion doses of Covid-19 shots per year.

Hanmi Pharmaceutical confirmed that it is in talks with multiple vaccine developers including Moderna for a CMO deal but declined comment on details including the companies in negotiations.

GC Pharma is another Korean pharmaceutical company that can produce Covid-19 vaccines as a CMO. The company already signed a contract with the Coalition for Epidemic Preparedness Innovations (CEPI) to fill and package more than 500 million doses of coronavirus vaccines for 14 months from March.

Other potential vaccine CMOs in Korea are SK Bioscience and Samsung Biologics. But the two have existing assignments for other vaccine developers and thus little room for Moderna vaccines.

Some say Moderna could assign a Korean partner to import and distribute its vaccine instead of production as contract manufacturing involves technology transfer and carries a business risk for the developer.