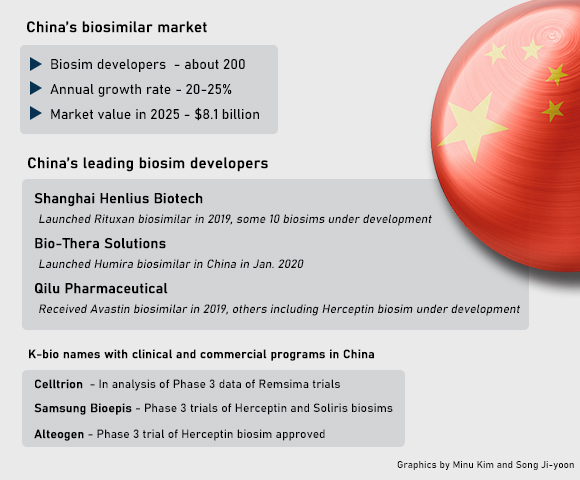 According to industry sources, some 200 Chinese companies are involved in the development of biosimilars. More than 20 companies are committed to a biosimilar to Humira, an autoimmune disease therapy being targeted by Korea’s Samsung Bioepis as its priority.

Shanghai Henlius Biotech often called as China’s Celltrion has developed or already launched some 10 biosimilars. Among these, HLX01, a biosimilar to Rituxan for the treatment of lymphoma and rheumatoid arthritis was cleared by National Medical Products Administration (NMPA) in Feb. 2019 and launched in July of the same year. Its Herceptin biosimilar HLX02 for the treatment of breast and ovary cancer was approved in Europe in June last year, while Avastin biosimilar HLX04 for ovary cancer reached the completion of a Phase 3 trial in China.

Another Chinese firm Bio-Thera Solutions has sold its own Humira biosimilar since January last year. China’s old pharmaceutical companies like Qilu Pharmaceutical are joining the local biosimilar market. Qilu received marketing authorization for its Avastin biosimilar QL1101 at the end of 2019, and its Herceptin biosimilar is in a final clinical trial.

China is making all efforts to foster its biosimilar companies. In 2016, the government introduced a system to minimize a review period for first-in-class therapies in China.

Companies of the likes of Celltrion, Samsung Bioepis and Alteogen are Korean names that are preparing for entry into the Chinese biosimilar market. Celltrion completed a Phase 3 trial of Remicade biosimilar Remsima in the country but whether it will be launched within this year remains uncertain. Celltrion said it is in the analysis of Phase 3 trial data and a possible submission for marketing clearance will be filed upon the data analysis.