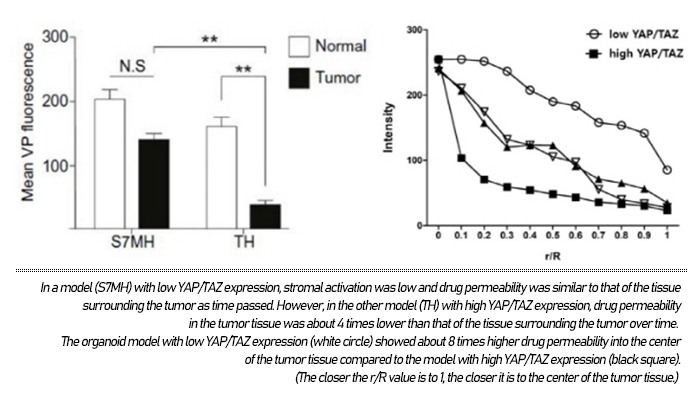 Various compounds targeting diverse oncogenic signaling pathways have been developed for HCC patients, but clinical outcomes so far have been unsatisfactory.

A research team of gastroenterology professors Kim Do-young and Park Jun-yong and researcher Cho Kyungjoo at Severance Hospital announced the results of an animal model study that could dramatically increase the efficiency of drug delivery by regulating the expression of the signaling protein YAP/TAZ in advanced liver cancer, the hospital said on Monday.

The team developed two murine models that mimic the pathological characteristics in HCC using hydrodynamics-based transfection (HT) methods and compared the models to observe drug penetration based on YAP/TAZ expression. Activation of tumor stroma was observed in HCC with a high YAP/TAZ activity, which impaired drug penetration.

Tumor organoids were treated with a drug, and distributions of the drug in the organoids were assessed using fluorescence microscopy. Consistent with the findings in the in vivo models of HCC, MCHOs with activated YAP/TAZ signaling showed stromal activation and impaired drug penetration. Inhibition of YAP/TAZ transcriptional activity in HCC cells significantly increased drug penetration into the MCHO.

The research findings were published in the latest issue of Hepatology, the official journal of the American Association for the Study of Liver Diseases (AASLD).

Drug development for liver cancer has been slow compared to other cancer types because liver function must be considered in pharmacological action in addition to drug efficacy and adverse reactions. According to Korean Liver Cancer Association, about 80 percent of all liver cancer patients have various underlying diseases, including cirrhosis. Activation of tumor stroma is observed in HCC with cirrhosis where drug delivery through blood vessels is not satisfactory.