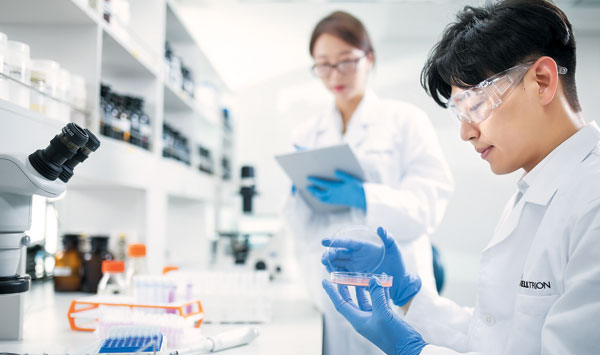 South Korea’s biotech industry, which took a hit from a slew of embarrassing trial scandals last year, is readying to rebuild credibility and make another leap with new drugs and trials.

The country’s bellwether biosimilar manufacturer Celltrion will launch Remsima SC, the subcutaneous version of its autoimmune drug, in several European countries including Germany next month. It will be the first product to be sold in Europe under the company’s direct sale system.

Celltrion plans to sell the biobetter with improved dosing convenience at a higher price than its reference drug. Patents will also be filed in over 130 countries this year.

Kolon TissueGene will submit additional data next month to the Food and Drug Administration for the resumption of its phase 3 trial for suspended gene osteoarthritis drug Invossa in the U.S. The drug was suspended in Korea due to ingredient mislabeling early last year.

Kolon TissueGene was told by the FDA in September to supplement data on the analysis of the investigational drug ingredient, including chondrocytes traits data from Invosa’s first fluid, data analysis of gene sequencing of the second fluid of Invossa, and confirmation of ingredient changes into the second fluid cells before and after irradiation. It will take another 30 days for the FDA’s review of the additional files. 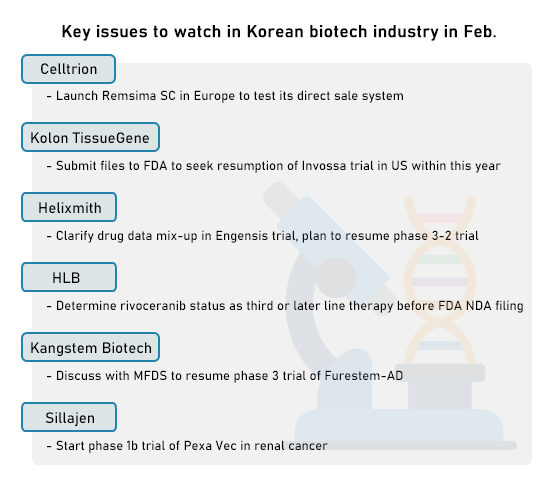 Helixmith, which was battered for its embarrassing placebo mix-up of Engensis gene therapy last year, will complete the investigation into the scandal and announce the results by mid-February. The results will be sent to the FDA to get approval of the outcomes of its phase 3-1 trial of the drug in the U.S. Last September, the company found an error in pharmacokinetic data of the global phase-3 trial on Engensis to treat diabetic peripheral neuropathy. If approved, the company could be able to start a phase 3-2 trial to support the drug’s efficacy and safety profile in March or April.

Helixmith said whether it will be approved depends on the February results and it will apply for marketing approval in around 2022.

HLB, which is developing targeted gastric cancer drug rivoceranib, will determine whether it will apply for marketing approval of the drug with the FDA as a third- or fourth-line therapy next month. Actual NDA submission is expected to come in March or April.