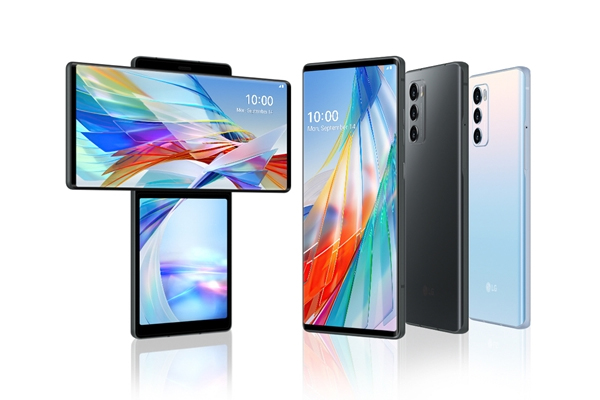 South Korean smartphone makers have raised the bar in applications with flexible panels with Samsung’s latest foldable opening to a book-like tablet while LG label upgraded its dual phone to flash out an extra wing for a different multi-screen experience.

The Wing showcased at a virtual global launch event on Monday features a double screen like the previous version, but that can be freely turned clockwise. This swivel display phone marks the first release from the company’s Explorer Project launched to breathe new life in smartphone design, according to Lee Yeon-mo, executive director of the MC division, LG Electronics.

The swivel mode allows users to open an app on both screens or two separate apps on each screen. The main screen can be rotated 90 degrees horizontally to watch a video while playing or fast forwarding it, while chatting or searching videos on the second screen.

Another feature is a 6.8-inch notch-less OLED full vision display in the main screen which has no camera hole, helping the user immerse in a video or a game. The display is equipped with a 32-million-pixel (MP) pop up camera that appears only when activated.

The rear camera setup includes: a 64MP main camera, 12MP ultrawide shooter specifically for swivel mode and another 13MP ultrawide. A gimbal mode with a virtual joystick on the second screen allows the user to shoot with one hand in a more stable way.

The swivel mechanism features an independently developed micro hinge with a hydraulic damper which absorbs shock. The company claims the Wing passed a test of 200,000 swivels.

The new smartphone is powered by the Snapdragon 765G 5G. LG did not reveal pricing details, but it is estimated to be over 1 million won ($850). The Wing will be first launched in South Korea next month, followed by North American and Europe.

By Lee Seung-yoon and Minu Kim