S. Korea laggard in the race to bring COVID-19 vaccine to market 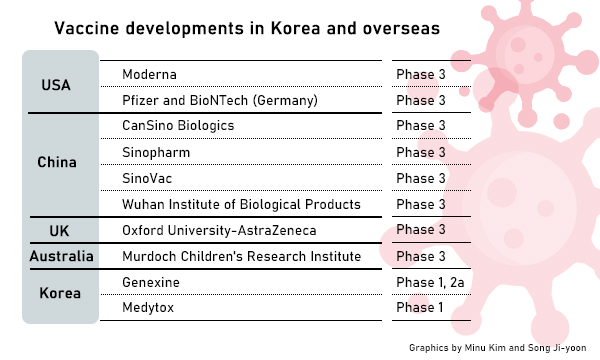 이미지 확대
Despite a thumbs-up mention from Microsoft cofounder Bill Gates, COVID-19 vaccine pipeline from South Korea has been laggard while U.S. and Chinese names are getting closer to marketing their products within the year.

Currently, 150 types of COVID-19 vaccines are under development around the world, of which about 20 have entered human clinical trials. Many companies have already entered a late-stage clinical trial under full government support.

American companies are now in the frontline. On Tuesday, U.S. vaccine developer Moderna Therapeutics announced a phase 3 trial for its mRNA-1273 vaccine. The trial will enroll 30,000 participants across 87 locations. According to U.S. health authorities, the vaccine is expected to be available later this year.

Pfizer and BioNTech Monday announced the start of a Phase 2/3 safety and efficacy clinical study to evaluate their vaccine in up to 30,000 participants at approximately 120 sites globally. The two companies plan to submit final review documents for vaccine approval to the FDA as early as October if the ongoing clinical trial is successful.

Chinese vaccine developers such as Sinopharm, SinoVac and Wuhan Institute of Biological Products are speeding up.

Murdoch Children`s Research Institute in Australia is awaiting phase 3 trial results, and the Oxford University-AstraZeneca team is testing their joint vaccine in a phase 3 trial. The vaccine is expected to be available in large quantities to the United Kingdom from September and the United States from October, sources said.

Korean developers could be at least a year behind. A handful of companies including Genexine, Medytox, SK Bioscience, GC Pharma, Boryung Biopharma, Sumagen, and G+Flas Life Sciences have announced their plan but only Genexine and Medytox have progressed into phase 1 or 2 trials.

Gates predicted SK Bioscience, whose vaccine program is backed by Gates Foundation, will be able to produce 200 million COVID-19 vaccine kits next year.

On Tuesday, Science and ICT Minister Choi Ki-young told lawmakers that a home-made vaccine is likely to be available sometime in September next year.