LG laggard, while Samsung and SK gallop away with bio breakthroughs 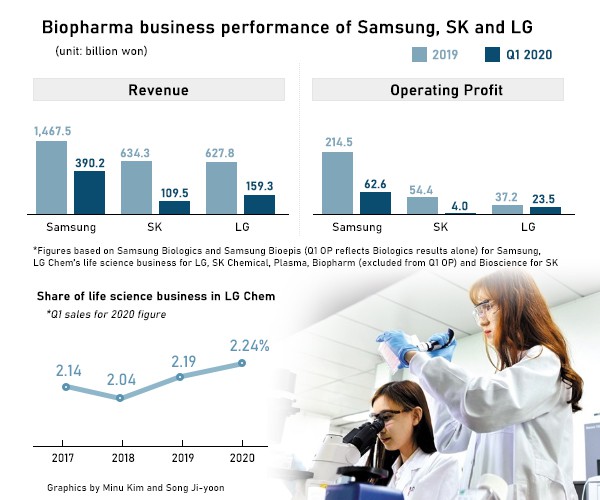 이미지 확대
In contrast to Samsung and SK whose parenting of bio and drug offspring has been paying off, LG has made little progress in grooming its life science even as it was first to venture into the field amongst Korea’s top business groups.

Samsung Biologics has grown to be the largest in terms of capacity in contract development and manufacturing since its entry into the sector in 2011. New orders have flooded in, reaching 1.8 trillion won ($1.5 billion) worth by June, already four times greater than last year’s full-year record.

LG Chem’s life science unit, the leading organization of LG Group’s biopharma business, pales in comparison. It contributes a mere 2 percent to LG Chem’s total revenue. It has not achieved a meaningful feat in its 40-year history apart from winning the first Korean grant from the FDA with its antibiotic Factive in 2003.

LG Chem combined business with LG Life Sciences three years ago for intensive resource management but there have been no tangible results in its response to COVID-19 or in novel drug development. Since November 2018, the company has taken the open innovation model seriously, picking up eight candidate molecules or materials from external sources. But they are largely diversified into oncology, stem cell, microbiome, botulinum toxin and molecular diagnostics, meaning the company’s own biotech identity is being diluted.

Samsung has focused on contract manufacturing and biosimilar development, while SK has concentrated resources on vaccines and chemically synthetic drugs to combat CNS diseases. Where LG’s focus lies is murky.

LG Chem claims drug development results through open innovation will come to fruition after 2025 and it aims to secure more than 15 clinical-stage promising molecules in its pipeline by 2024. The company has invested about 400 billion won in R&D for three years since business combination and up to 1.2 trillion won will be spent on life science research over the next five years, a LG Chem official said, adding the company’s 2030 revenue target is 3 trillion won in biotech business.