South Korea’s exports of COVID-19 detection kits amounted to $514.8 million in the first six months of this year, a 13-fold spike from $40 million a year ago, government data showed on Wednesday.

Monthly test kit shipments jumped to $43.94 million in March as COVID-19 developed into a pandemic and peaked at $200 million in April before coming down to $100 million in following months, according to the data from the Ministry of SMEs and Startups. 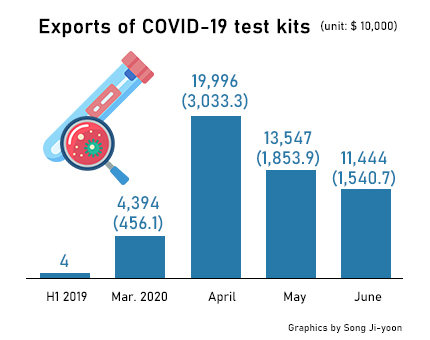 이미지 확대
Brazil was the largest importer of Korean test kits, accounting for 13.5 percent of total shipments in the first half. It was followed by the United States (11.3 percent), Italy (8 percent), India (6.8 percent) and the United Arab Emirates (5.9 percent). The number of countries that imported Korean test kits came to 149.

In terms of value, test kit products topped the list followed by antibiotics whose first-half shipments climbed 62.4 percent on year to $219.9 million. Hand sanitizers ranked third with exports of $216.42 million, a nearly 700-fold increase from a year ago. Exports of protective clothing for medical use reached $64.79 million, a whopping 71,575 percent jump from a year ago.

By Lee Duk-joo and Minu Kim