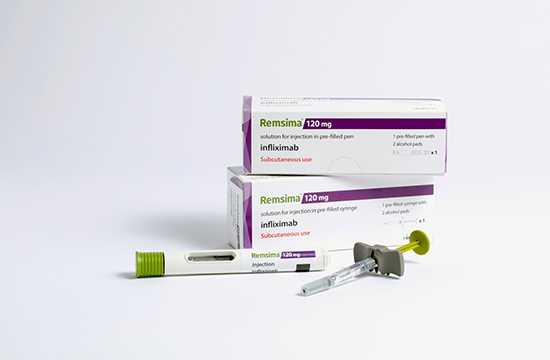 South Korea’s leading biopharmaceutical company Celltrion Inc. said on Monday that it has received a positive opinion from the Committee for Medicinal Products for Human use (CHMP) under the European Medicines Agency (EMA) for additional indications for its autoimmune disease drug Remsima SC, the world’s first subcutaneous infliximab biosimilar.

The CHMP opinion comes after Celltrion received marketing authorization for Remsima SC from EMA for the treatment of rheumatoid arthritis in November, last year. The bio company had put out efforts to expand indications to include IBD and others. CHMP is an organization that provides opinions to the EMA based on scientific evaluation results of medicines. A positive opinion would lead to approval in Europe.

Generally, the EC gives final approval within three months after the CHMP’s opinion. Once indications are added to Remsima SC, the autoimmune disease drug will become the world’s first infliximab SC to cover all indications of the drug’s intravenous formulation.

Remsima SC is expected to be sold in 31 European countries after final EU approval. Celltrion also aims to receive approval from total 97 countries this year.

The Korean biotech giant is engaged in a process to receive new drug authorization for Remsima SC in the shortest period in the United States and Japan.

Celltrion will use the patent as a barrier to prevent competitors and maintain exclusivity in the infliximab SC market over the next 20 years.

Celltrion has presented superiority, efficacy and safety data of its infliximab biosimilar SC in the treatment of IBD at various academic conferences.

Celltrion Healthcare, the distribution and marketing arm of Celltrion, plans to focus on patient convenience of self-administration in the use of the SC formulation in its marketing program. Celltrion’s initial sales target for Remsima SC is more than 10 trillion won with more than 20 percent in the global autoimmune disease treatment market.

Since the first approval of Remsima SC in Europe last November, Celltrion Healthcare successfully launched the biosimilar drug in Germany in February, as well as in the United Kingdom and the Netherlands. There will be more launch countries in Europe this year.