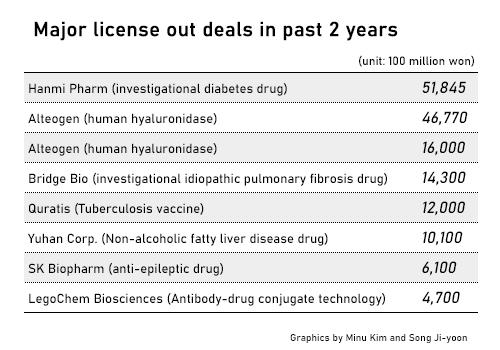 이미지 확대
Korean biotech company Alteogen aims to achieve three to four more license deals this year in addition to massive nonexclusive deal of up to $3.87 billion signed on Wednesday with a global pharmaceutical company over its recombinant human hyaluronidase (ALT-B4) technology that can convert intravenous injection into convenient subcutaneous injection.

Under the agreement, Alteogen will receive an upfront payment of $16 million and is eligible to receive additional payments of up to $3.86 billion tied to the achievement of development, regulatory approval and sales milestones.

Investors however were wary. The Kosdaq stock fell 3 percent additionally Thursday to 276,900 won upon losing 14 percent on Wednesday.

Alteogen will be responsible for the clinical and commercial supply of ALT-B4 materials, while the undisclosed big pharma will retain the global rights to develop and commercialize multiple products in combination with Alteogen’s technology.

이미지 확대
Alteogen’s latest license deal is the second largest ever signed in the Korean pharmaceutical industry following Hanmi Pharm’s license deal with Sanofi in Nov. 2015 over its investigational diabetes drug for about $4.3 billion.

It also marks Alteogen’s second license deal after last year’s smaller contract to license out the company’s conversion platform technology, which is free from exclusivity restrictions. This means the company can launch negotiations for out-licensing to other multinational pharmaceutical companies. 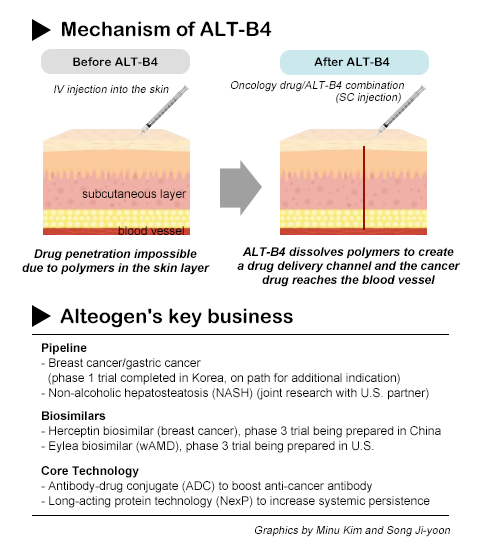 이미지 확대
Hyaluronidases are a family of enzymes that can degrade hyaluronic acid and increase tissue permeability. They can be applied to various IV drugs to facilitate their dispersion and delivery.