KT SAT to launch new 5G satellite into orbit by 2024 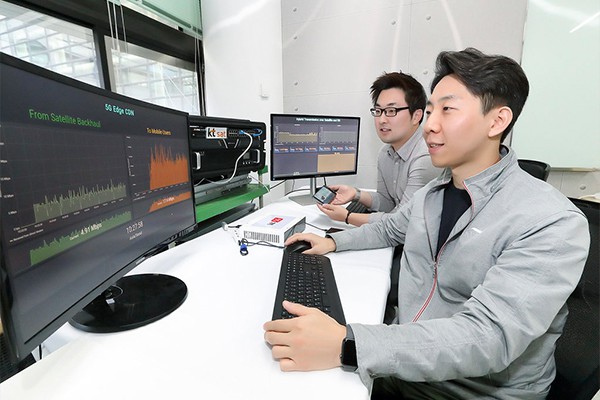 KT SAT, the satellite operating unit of South Korean telecom giant KT Corp., plans to launch a new satellite into orbit by 2024 to expand the infrastructure for 5G deployment.

The Mugungwha Satellite 6A would be placed in the same orbit as its predecessor, Mugungwha Satellite 6, at 116 degrees east, the company said Thursday at an event marking the 50th anniversary of South Korea’s first satellite communication center in Geumsan-gun, South Chungcheong Province.

To meet the intended deadline, the company aims to wrap up the technical side of the project by the year-end to start building the satellite from 2021.

The 6A satellite would support large volumes of data transfer and changes in beam coverage, making it suitable for addressing data traffic spike from increased 5G use, according to KT SAT. The new satellite would have 10 times the throughput of its predecessor and offer flexible beam coverage, a feature not available in its previous peers.

KT SAT will start a joint 5G satellite research project with the European Union in the coming months. In May 2021, it plans to demonstrate 5G live streaming via satellite at the France Open tennis games.

The company is also set on broadening its satellite-based platform services. Plans are underway to release an integrated maritime system next year that offers an array of solutions including internet, CCTV and navigation control. It is also expanding its global reach, targeting archipelago nations like the Philippines and Indonesia that have difficulty setting up a communications network, as well as Mongolia and the Middle East.