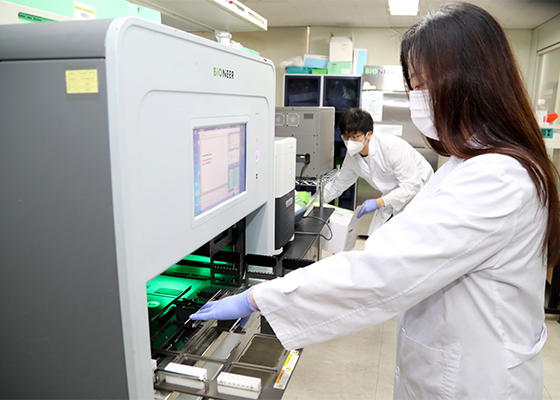 South Korea’s Bioneer Corp. is expanding its presence and poised for further growth in the molecular diagnostic assay market, which has been traditionally dominated by large foreign companies.

The company is now flooded with orders from around the world for its proprietary RT-PCR molecular diagnostic equipment for COVID-19. Monthly exports of such equipment are 2 to 3 times as large as total exports achieved throughout last year, Bioneer CEO Park Han-oh told Maeil Business Newspaper in a recent interview.

Still, the local market is monopolized by multinational pharmaceutical companies like Roche and Abbott, but their assays are expensive enough to reach $150,000 to $350,000 per unit. Bioneer is the only Korean company that has successfully localized such expensive diagnostic equipment. It also manufactures diagnostic reagents.

Most of the companies that have received European certification (CE-IVD) in the molecular diagnosis of COVID-19, hepatitis B and C infection and AIDS are multinational companies, but Bioneere is the only Asian company that has obtained all of these certifications, Park said. 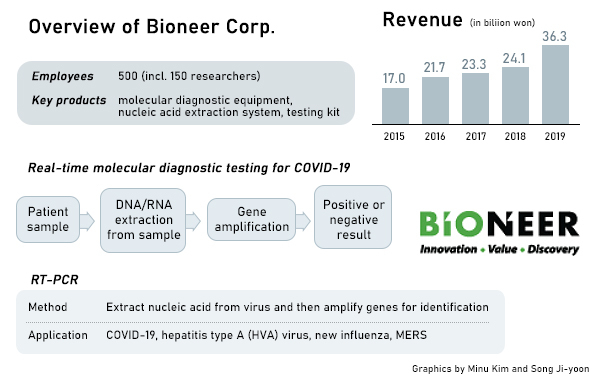 이미지 확대
Bioneer is also developing a COVID-1919 therapy that can neutralize the virus by breaking a specific RNA-protein interaction with siRNA synthesized with its own DNA synthesis technology.

“Based on our DNA synthesis technology, we made 980 types of candidate molecules to fight COVID-19 faster than anyone in the world," Park said, adding animal testing will begin from early June.

A therapy for preventing pulmonary fibrosis in COVID-19 patients was already tested in animal models and will be evaluated in human clinical trials within this year. This will be a first-in-class drug with a totally different mechanism of action that targets DNA sequences, Park said.

Park, who received a Ph.D. in biochemistry from Korea Advanced Institute of Science and Technology (KAIST), founded Bioneer in 1992, the first biotech venture in Korea. He was the first researcher-turned-businessman from the state-run science research organization where he studied DNA synthesis technology.

After the foundation, his business came to fruition quickly. PCR diagnostic products that replicate target genes into hundreds of millions of genes in one or two hours became popular in domestic hospitals, research institutes, and laboratories. It took at least a month to get a new product from overseas, but Bioneer’s localized PCR products allowed many domestic companies to get job done immediately. In 2002, the company developed an RT-PCR assay named ExStation Series, which marked the first in Asia that can amplify genes in real time and can detect target genes with a probability of over 99 percent.

“It is an assay that is sensitive enough to detect contamination with a drop of blood in a large pool of water,” said Park. This assay was deployed as a biological weapon detection system against bioterrorism during the Korea-Japan World Cup. During the 2009 H1N1 epidemic, Bioneer`s automatic systems to extract DNA and RNA along with about 150 units of its RT-PCR assays were up and running to carry out testing on a large scale.

Founded in 1992, Bioneer operates a head office for both research and production in Daejeon and a factory in Cheongju.