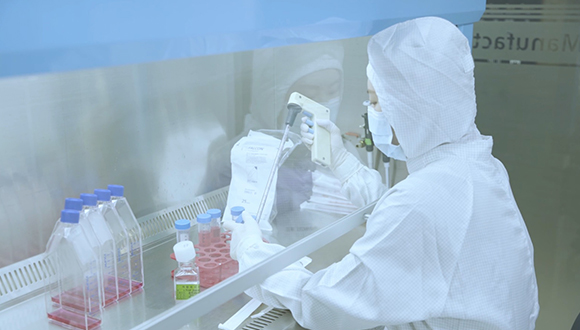 The prolonged COVID-19 crisis has upset drug development and pipeline for Korean biotech companies, but at the same time provided new business opportunities.

Stem cell therapy developer Pharmicell has been hit a deadlock in commercial development of its investigational stem cell drugs to treat erectile dysfunction, prostate and ovarian cancer. The company submitted phase 2 and 1 protocols to the Ministry of Food and Drug Safety in March, but a regulatory decision has been delayed due to the virus spread. The company was comforted by the jump in sales of its API nucleosides in connection with nucleoside-based drugs and testing kits to control COVID-19.

Pharmicell accounts for more than 80 percent of the global market of nucleosides used in diagnostic and pharmaceutical purposes. The company’s nucleoside sales came to 3.2 billion won ($2.6 million) in the first quarter, up 28 percent from a year ago. Sales of the company’s chemical business which produces nucleosides, as well as flame retardants for polyester fiber, and intermediates of electronic materials increased 25 percent on-year to 8.8 billion won in the Jan.-Mar. period. Nucleoside sales are expected to increase further in the second quarter.

이미지 확대
Hugel, the country’s largest botulinum toxin provider, has suffered from a sharp decrease in the number of visiting patients to hospitals and clinics as they avoid physical interaction for fear of virus infection. Sales of its key product Botulax contracted from 20.3 billion won to 18 billion won in a year. But the company’s medical device business remained strong due to upbeat sales from cerebral aneurysm medical devices. A cerebral aneurysm is a bulge in a weak area of the wall of a brain artery. Hugel is an exclusive distributor of cerebrovascular healthcare products developed by MicroVention, a Japanese neuroendovascular medical device company, in Korea. Hugel said its medical device unit is expected to surpass 20 billion won in sales for the first time in history.

GemVax & KAEL, a Korean cancer drug and vaccine developer, make a profit from filters in the semiconductor and display industry, supporting its mainstay healthcare business that has no profit yet. GemVax & KAEL had been focused on such filter business until 2008, when it acquired GemVax, then a Norwegian cancer vaccine developer. The filter business generated 14.4 billion won in sales in the first quarter, up from 8.8 billion won a year ago.

LG Chem’s primary biosimilar is Eucept, the copy of rheumatoid arthritis drug Enbrel. The Enbrel market in Japan is valued at 400 billion won, the world’s second after the U.S. Eucept’s market share keeps growing since it was launched in Japan in May 2018, the company said.