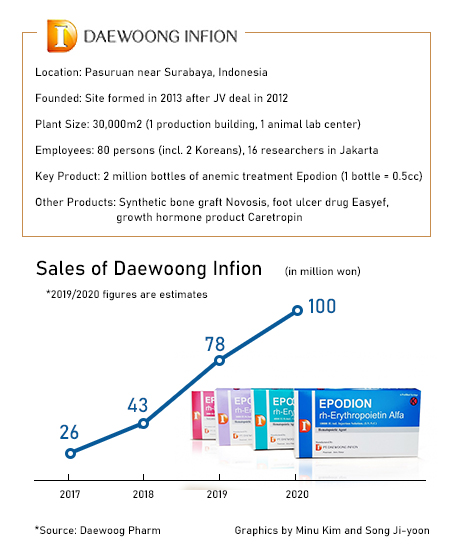 The JV established in 2012 completed the construction of Indonesia’s first biopharmaceutical plant in 2016 in Pasuruan about 50 kilometers south of Surabaya, Java. The plant is rolling out Epodion, a popular anemia drug for kidney-dialysis patients and those who receive chemotherapy.

With the halal certification, Daewoong Infion is pushing to expand its business into adjacent Muslim countries in Southeast Asia. Daewoong Infion President Seo Chang-woo recently told Maeil Business Newspaper in an interview that it is the company’s future goal to build a plant for Daewoong Pharm’s bio medicines in the Middle East, making inroads into ASEM and Islamic states whose combined population is expected to reach about 3 billion.

Halal certification is essential to doing business in Southeast Asian countries that have significant populations of Muslims. Epodion uses a therapeutic protein called erythropoietin derived from Chinese hamster ovaries. Erythropoietin is a red blood cell growth control hormone produced in the kidney and it is helpful for cancer patients who struggle with iron-deficiency anemia after chemotherapy. Dialysis patients whose renal function is markedly impaired by chronic renal failure can sustain life without blood transfusion when treated with Epodion alone.

But it was hard to imagine to obtain halal certification for the animal cells-derived biopharmaceutical. Daewoong Infion had failed a document review two times just because of the use of an animal ovary for the drug. Last October the Indonesian Islamic religious court ruled in favor of the company, citing that hamsters are rodents, but they are different from halal-banned ordinary rats due to their significant difference in the DNA structure.

Statements from religious scholars and biologists at National University of Indonesia, Jakarta, who joined the so-called “hamster trial” as witnesses were instrumental to the company’s win in the legal battle. Daewoong Pharm has run a joint research institute with the university, and this eventually led to halal certification for its drug, the company said.

Upon receiving the certification, Daewoong Infion expects Epodion’s market share in Indonesia would be raised to 80 percent from the current 40 percent.

In addition to Epodion, Daewoong Infion plans to sell Easyef, a spray-type drug for diabetic foot ulcer, in the first half of this year. It will also produce growth hormone product Caretropin next year.

Daewoong Infion hopes to win halal certification for the other two products.

Halal certification also means authentication on the company’s manufacturing facility. The local plant that meets rigorous European GMP standards is equipped with a system that detects even small dust particles in real time through an air filter installed in the ceiling and disinfects every device with a hydrogen peroxide shower.

Biomaterials are transferred only through sealed metal pipes, not through human hands in individual process zones to prevent possible contamination.