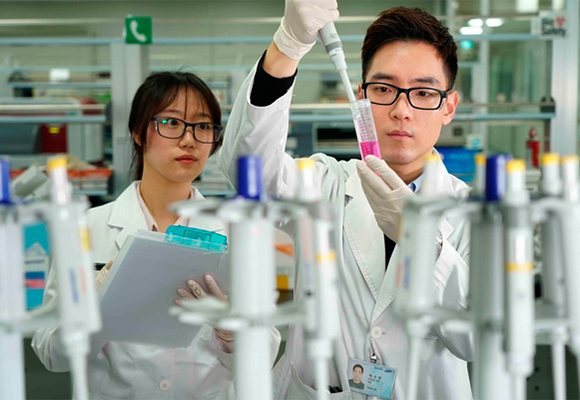 Korea’s major biopharmaceutical companies are actively pursuing the opportunity to increase their presence in China by entering a phase 3 study, the final phase of human clinical trials ahead of applying for marketing approval in the fast-growing world’s second largest pharmaceutical market.

According to industry sources on Monday, Samsung Bioepis is awaiting the regulatory decision of China’s National Medical Products Administration (NMPA) on the filing for approval of its investigational cancer drug SB8 (bevacizuman). The company expects the phase 3 trial of the biological agent to be approved within this year.

SB8 is a biosimilar version of Avastin for the treatment of metastatic colorectal cancer and non-small cell lung cancer. A year ago, Samsung Bioepis signed a contract to allow its Chinese partner 3S Bio to seek commercial development of SB8 in China. 3S Bio plans to launch three phase 3 trials in China upon approval. Samsung Bioepis received approval of a phase 3 study of its breast cancer drug SB3 last month and rare disease drug SB12 this month.

Celltrion, another biosimilar giant in Korea, completed patient enrollment for its phase 3 study of Remsima (infliximab) in China.

Celltrion received phase 1 and 3 studies of the biosimilar in China at the same time in May 2017. The company has conducted a phase 3 trial since Oct. 2018 after agreeing with the NMPA to skip the phase 1 study.

A Celltrion official said patent recruitment was completed earlier than expected late last year and procedures for clinical trials of other biosimilars such as Truxima and Herzuma will be conducted as planned.

Daewoong Pharm also launched a phase 3 study of its botulinum toxin product Nabota in China. Daewoong Pharm has high growth potential in that there are only two botox brands officially approved in China.

BridgeBio draws attention for its early-stage drug development efforts in China as it is due to start a phase 1 study of new ulcerative colitis drug BBT-401 in May.

China’s pharmaceutical market is estimated to grow to 304.6 trillion won ($263 billion) in 2020 from 207.5 trillion won in 2015, according to the Korea Biotechnology Industry Organization.