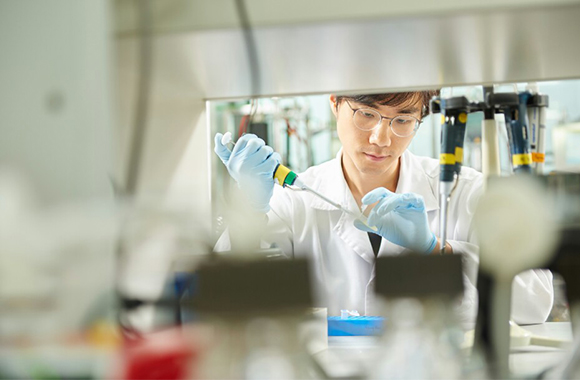 South Korean pharmaceutical companies are going all out to raise overseas sales by launching new offices and speeding up planned clinical trials to capitalize on the newfound global spotlight from their fast response to COVID-19 pandemic.

Most local pharma firms face slump in first quarter sales due to fewer visits of patients at hospitals and clinics, who need prescription drugs for various medical conditions. Outpatient prescription sales declined about 40 billion won ($32.7 million) from 1.25 trillion won in January to 1.21 trillion won in February. Market watchers say the figure for March and April will be at significantly lower levels.

To stave off slow sales and return to organic growth, Korean pharmaceutical companies are striving to increase sales overseas and scale up clinical trials overseas to fasten time to market for their promising drug candidates.

Yuhan Corp., the largest prescription drug company in Korea, recently made a final decision to set up a local entity in Europe in the second half of this year. Yuhan set its foot in the global market by opening its first overseas office in Ho Chi Minh City, Vietnam in 2016. Later it began to build a network in the U.S. by opening a business entity in San Diego and an office in Boston in 2018.

Last year, the company inaugurated local entities in China and Australia. This year’s destination is Europe. Europe is the world’s second-largest pharmaceutical market behind the U.S. and it is a must place for drug development, said a company official, adding the company’s business organization will be located in London, Paris, Basel or Munich where top-notch biotech firms are clustered.

이미지 확대
Chong Keun Dang (CKD) whose full-year sales crossed 1 trillion won ($816 million) for the first time last year is accelerating commercial development of its autoimmune drug CKD-506 to explore business opportunities overseas. The investigational drug has a new mechanism of action that suppresses specific gene expression to reduce inflammation and strengthen immune regulator T cell function to maintain immune homeostasis. The new molecule, which has already demonstrated efficacy and safety in preclinical and clinical phase 1 trials, is being studied in a phase 2a trial involving rheumatoid arthritis patients in five European countries. CKD plans to develop the drug as a first-in-class therapy that can replace standard regimens and expand the drug’s indication to include a far broader group of patients with autoimmune diseases in the global market.

Daewoong Pharm, another pharmaceutical company that joined the 1 trillion won revenue group along with CKD, expects to remain on track to sell its botulinum toxin Nabota in the U.S.

Dong-A ST is planning to expand its overseas sales network for new anti-tuberculosis drugs closerin and cycloserine (API). As its U.S. clinical trial of diabetes treatment DA-1241 was recently completed, it is about to launch subsequent clinical trials. It will also aim to increase sales of a canned version of its energy drink Bacchus in Asia-Pacific countries.

Hanmi Pharm is focusing efforts on orphan drugs in the U.S. Hanmi Pharm has so far obtained 10 molecules in its pipeline designated as orphan drugs around the world. The company recently gained the FDA orphan drug designation for its anti-NASH drug candidate for the treatment of primary biliary cholangitis and primary sclerosing cholangitis.