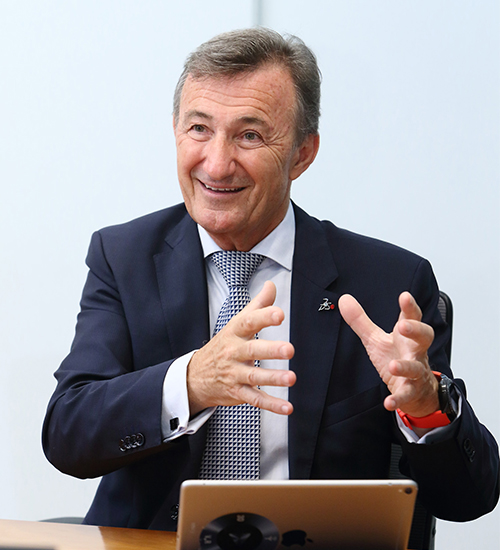 이미지 확대
Dassault Systemes, one of the world’s biggest software companies, is at the core of today’s design tasks in the manufacturing and infrastructure sector ranging from Cartier watches to Uber’s latest mobility concept to smart city projects, as its 3D design and 3D digital mock-up provide users superiority in speed, engagement and collaboration, precision and more.

Second, it’s engagement and participation. When 3D design is open to many people, it is possible to draw more people to a specific project. “Many consumers are trying to make their own products through 3D and this is a very surprising phenomenon. Moreover, Dassault’s` 3D Experience Platform is built not only to design products in three dimensions, but also to analyze data from three-dimensional space,” he said.

Dassault also offers a kind of `app store` that sells codes for companies designing in 3D space. For example, a company sells a program that automatically recognizes three-dimensional drawings of similar automotive parts and classifies them into one on Dassault’s 3D platform.

“It`s basically you have the canvas everywhere for collaboration and imagination,” he said.

Third, it’s precision. "A designer at a watch company recently told me that one of the reasons he uses Dassault’s 3D software.

He further noted that designing a watch in 3D was special 10 or 15 years ago, but now it`s essential. Mobility companies are looking for more Dassault solutions since they want precision. Among the Dassault customers in this area are Uber, Amazon Delivery and Canoo, an electric vehicle company based in Los Angeles, which recently formed a partnership with Hyundai Motor. Joby Aviation, an air taxi service company, also uses Dassault’s 3D solution, he said.

Finally, 3D designing enables simulation of the real world, which means a virtual twin. This is especially useful for smart cities. "In essence, no one knows how the city we live in today operates. Nobody can predict exactly what will happen after the work is done, assuming that parts of the city are being remodeled," he said. In this regard, Dassault took a completely different approach to smart cities. It is not a smart city with Internet of Things or artificial intelligence, but a virtual city that duplicates a real city, providing a reference. “Your computer is connected to the virtual twin experience for the production line for what the production line is doing.”

If a virtual city is created in 3D in advance, when designing a real city, each department in the city administration can approach each other in the same language by looking at one common reference and not talking differently, he explained.

The `Virtual Singapore` project is underway with a Dassault 3D solution. "We are working on projects in some regions, such as Taiwan and Shenzhen. I also found that Korea has a deep understanding of Virtual Twin."

“Today, most computer screens are two-dimensional. However, many companies can expand their computer screens in three dimensions to gain four strengths: speed, collaboration, precision and reference for the real world,” Charlès emphasized.

Bernard Charlès, born in Brittany, France in 1957, is a graduate from the Ecole Normale Supérieure engineering school in Cachan and has a PhD in mechanical engineering majoring in automation engineering and information science. He joined Dassault Systèmes in 1983 and was named CEO in 2002. Bernard Charlès holds the rank of Officer in the French Legion of Honour.

By Shin Hyun-kyu and Minu Kim