Korea’s Kogene Biotech files for approval of its COVID-19 kit in U.S. at request of FDA 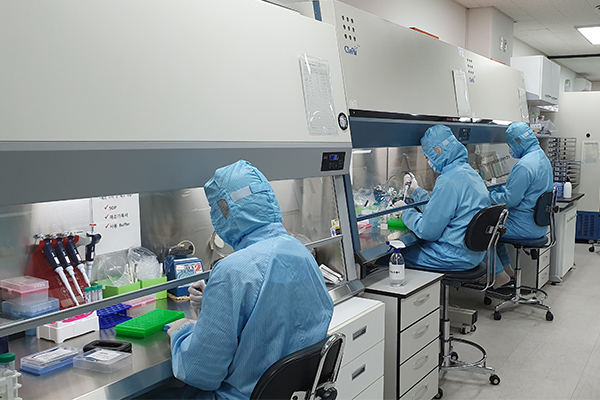 Kogene Biotech, a COVID-19 detection kit maker in South Korea, said the U.S. Food and Drug Administration (FDA) recently asked it to file an application for emergency use authorization (EUA) with the U.S. government to help meet mounting demand for testing across the continent.

The unlisted Korean company is now flooded with orders around the world after it was introduced in local media as the first to deliver a COVID-19 detection kit to the market under the Korean government’s EUA system.

In a recent interview with Maeil Business Newspaper, Kogene Biotech President Nam Yong-seok said such orders are coming through Korean embassies, local distributors, and KOTRA offices around the world, adding the company’s kit will be supplied across the U.S. upon EUA approval.

The shipment of Power Check is increasing toward Saudi Arabia, United Arab Emirates (UAE), Iraq, Jordan, Kuwait, Turkey, Sudan, Egypt, and other Middle Eastern and African countries, and Greece, Belgium, Poland, Azerbaijan, Tajikistan, and other countries in Europe and Central Asia. The company is also in talks to provide it to Japan, China, Hong Kong, and North and South American countries after obtaining a license for export items and Europe’s CE-IVD (CE In-vitro Diagnostic Device) certification last month.

The average weekly supply of Kogene Biotech`s Power Check is some 10,000 kits, more than the sum of what was rolled out from three other EUA-eligible kit makers in Korea.

Nam said half of total output is allocated to COVID-19 kits, and it is ready to scale up production by three times the current level in case of emergency. 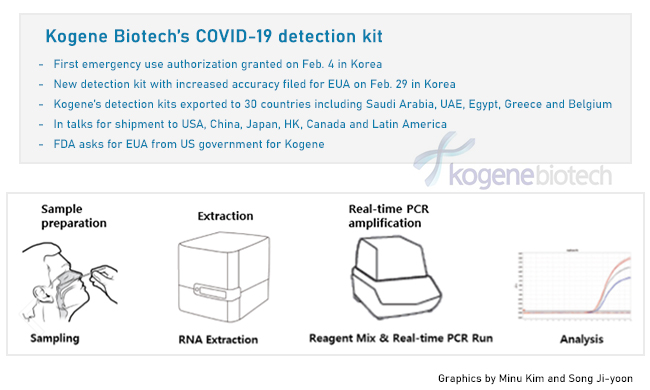 이미지 확대
Kogene Biotech was the first developer of diagnostic reagents for the H1N1 influenza in 2009 and the MERS outbreak in 2015 in Korea. The company then drew attention for 100 percent accuracy in testing in the supply of its diagnostic kits to cover 42,000 tests.

In December of last year, the company began a literature review on news of the coronavirus infection in China, and then launched development on Jan. 10 after the virus genetic information was unveiled on the GISAID website, Nam said.

The company’s key technology behind Power Check is its real-time PCR based assay with which it has developed some 800 reagents for gene testing over the past 20 years.

Power Check features its ability to identify two genes (E and RdRp) that can detect only COVID-19 virus by excluding specific genes that can cause diagnostic errors caused by genetic mutation.

It is also optimized for universal use in any equipment, with all verification procedures completed with commonly used diagnostic equipment at public health centers and hospitals, said Nam.

Nam received a Ph.D. in biochemistry and molecular genetics from Korea University. While working at the National Institute of Infectious Diseases and Allergy (NIAID) under the U.S. Centers for Disease Control and Prevention as a postdoctoral researcher, he studied AIDS virus among others. He founded Kogene Biotech in 2000.