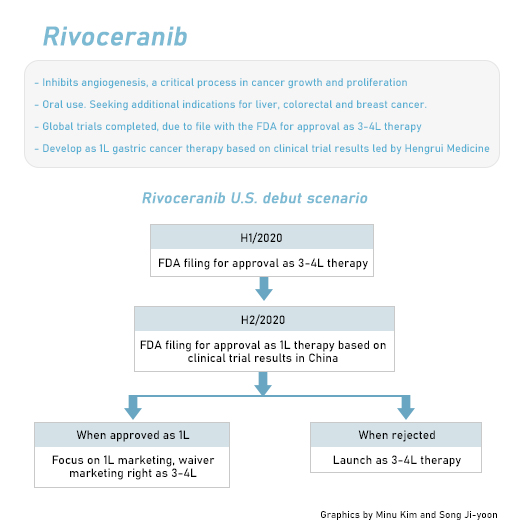 이미지 확대
HLB, a Korean bio name working on targeted gastric cancer drug rivoceranib, has decided to file with the U.S. Food and Drug Administration (FDA) for approval of the drug as a first-line therapy following its planned NDA as a third or fourth-line regimen.

The Kosdaq-listed company said on Wednesday it is aiming to obtain a separate FDA approval for a clinical trial and marketing of rivoceranib as a first-line therapy in the U.S. based on positive results in China which are expected to come out soon.

HLB’s Chinese partner Hengrui Medicine has completed a phase 3 study of rivoceranib in combination with an immune-oncology drug to treat patients with stomach cancer in a first-line setting.

An HLB official said the company will seek the FDA’s decision within the first half of this year to determine whether to launch rivoceranib as a third-line or a fourth-line drug and then step up efforts to apply for a first-line approval depending on the situation as it will take time to get full trial results from China.

The move is intended to bring rivoceranib to more patients and maximize profit. It also reflects the FDA’s growing confidence toward Chinese medicines that can help reduce costs in combo over expensive immunotherapy agents like Keytruda used along with a chemo drug. Rivoceranib acts by inhibiting angiogenesis, a critical process in cancer growth and proliferation.

이미지 확대
HLB holds marketing rights to rivoceranib around the world except China and the FDA’s approval of the drug to treat multiple cancer types based on data from China is expected to help fast track the company’s entry into other countries.

Hengrui Medicine launched rivoceranib as a third-line gastric cancer therapy in China in 2014 and has conducted some 70 clinical trials to evaluate the drug in combination with other oncology drugs to get additional indications such as liver cancer, lung cancer breast cancer and ovary cancer.

When approved as a third and fourth-line therapy, the drug can be used for patients who do not respond to first and second-line treatments. This means the drug will have a smaller group of target patients than its first-line counterparts.

According to the Korea Health Industry Development Institute`s report, the value of the world’s gastric cancer care market is expected to reach $11 billion in 2030. Of this, third and fourth-line therapies are estimated to represent a mere 5 percent.