Cheaper, prettier, lighter Samsung Z Flip may be a hit among the young 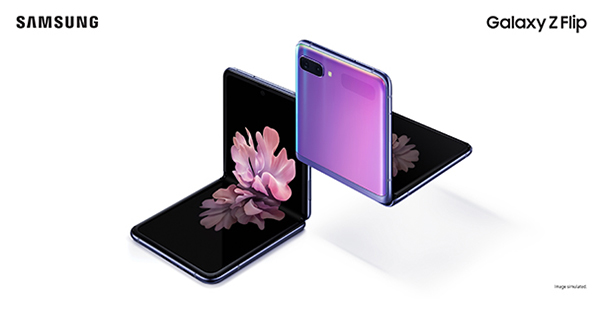 Samsung’s newest folding phone Galaxy Z Flip may steal the hearts of females as it looks more like a stylish compact powder than a phone, which wondrously opens up to 90 degrees for a hands-free experience.

While the Galaxy Fold introduced last year represents the beginning of a whole new smartphone history, the Galaxy Z Flip is a new device that changes everything from design, size and experience that a foldable smartphone can offer, Samsung Electronics defined.

The sleek foldable phone that snuggly fits into a shirt pocket features the world’s first ultra-thin glass with a horizontal crease across the center of the device that will fold up to 200,000 times, according to Samsung.

The most outstanding feature of this device is its form factor - the split screen. Users can bend the Galaxy Z Flip at a 90-degree angle to take selfies, videos, and video-chat hands-free. A video chat service powered by Google Duo is also optimized in the Galaxy Z Flip, allowing up to eight people can join at the same time. 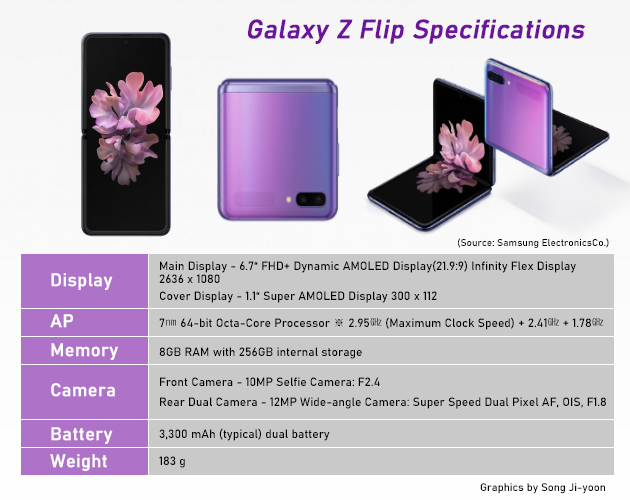 이미지 확대
The Galaxy Fold’s unique multi-active window interface is available in the new device. For example, the horizontal screen split allows users to see selfies on the top half while controlling them with different menus on the bottom.

When the device is folded, a small front-facing display shows users the time, date, texts and reminders. It has two rear cameras: 12-megapixel ultra-wide-angle; 12-megapixel wide-angle and one front camera: 10-megapixel. Both front and rear cameras support 4K-grade video shooting. The phone goes on sale on Feb. 14 with a price tag of 1,650,000 won ($1,400).

The price tag also has become compacter from near-$2,000 of the first foldable.

It has stolen the unpacking show in San Francisco on Tuesday, although the Galaxy S20 series – the 11th flagship – sport all the newest and extra features. Analysts predict the Flip will likely cause cannibalization in the flagship sales.

Samsung Electronics is pushing the foldable as its new edge over others in the premium league and plans to roll out another type in the second half.