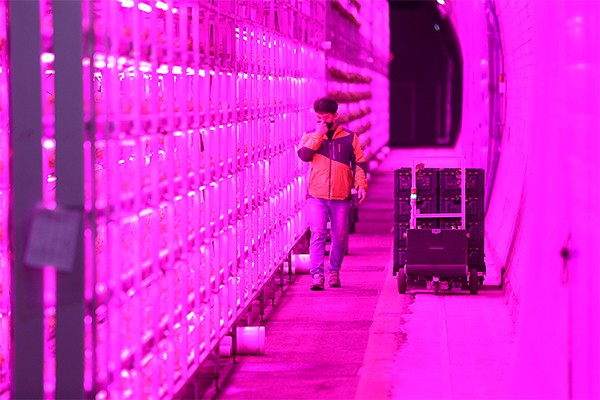 An abandoned highway tunnel that once connected cities of Daejeon and Daegu in southern South Korea is now home to the world’s largest indoor farm equipped with high-tech LEDs and sensors for hydroponic growing.

Okcheon Tunnel, the oldest part of the country’s main artery Gyeongbu Expressway, has been transformed into incubators for high-quality vegetables, strawberries, and crops for biomaterials. The farm’s floor spans 6,700 square meters, larger than a similar farm run by U.S. AeroFarms, a commercial leader in fully-controlled indoor vertical farming, according to its operator Nexton.

Nexton, a LED startup that operates the tunnel farm, was established in 2017 by three LED experts from Seoul Semiconductor, the world’s second-largest LED manufacturer with more than 14,000 patents.

A towering shelf body for leafy vegetable growing has 14 tiers from the tunnel floor to the ceiling with a single shelf 200 meters long. Key products that include Ezabel and Caipira lettuce are delivered to upscale franchises and large retailers. An annual output reaches 300 tons, equivalent to that from traditional soil farming on a 165,000 square meter. A shelf in the south end of the tunnel is for low-temperature strawberry cultivation. The section of 300-meter long shelves yields about 100 tons of strawberries per year.

Choi left Seoul Semiconductor in 2013 and explored new business opportunities in the field of indoor farming after he acquired a small LED lighting company. In a recent interview, Choi told Maeil Business Newspaper that he started to search for abandoned tunnels nationwide and found Okcheon Tunnel an ideal place to do indoor farming by reducing investment and operation costs while realizing economies of scale.

Choi said Nexton can stably produce leafy vegetables and strawberries thanks to its patented technology on LED lighting that replaces sunlight for plants. 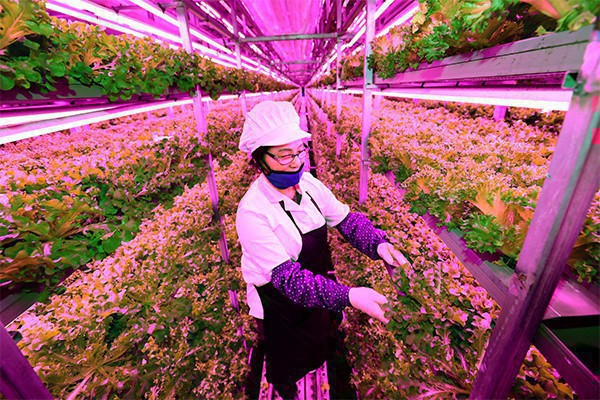 Nexton’s LED is advantageous for indoor farming with low heat generation. General LEDs used in other indoor farms rise to 67 degrees Celsiusm which should be controlled by expensive air conditioning. Nexton’s LED heat does not rise above 32 degrees, Choi said.

Another strength is its LED design technology that produces the most favorable wavelength for photosynthesis. Air conditioning technology used in the LED manufacturing plant was also applied to the tunnel to support vegetable breathing.

Nexton is also devoted to the growing of biomaterial crops that can be used for functional foods or pharmaceuticals. Choi said the company is considering mass production of various functional material crops, while establishing a separate growing asset for medicinal hemps and launching overseas business as well.

By Jung Hyuk-hoon and Minu Kim