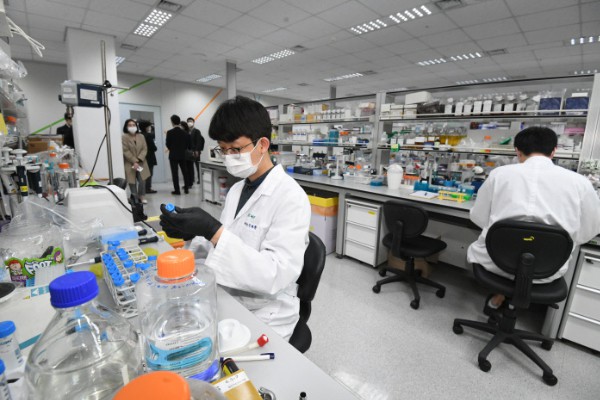 The traditional big five - GC Pharma, Yuhan Corporaiton, Chong Kun Dang (CKD) and Daewoong Pharmaceutical – turned out stronger income for the third quarter ended September from the same period last year. Hanmi Pharmaceutical was the only major that posted an operating loss due to a one-time cost related to its terminated license deal in the period. 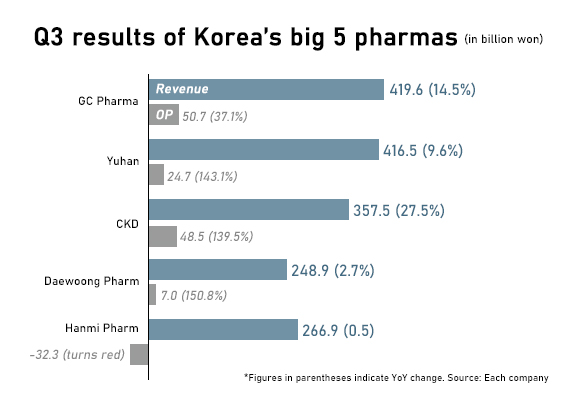 이미지 확대
Yuhan reported an operating profit of 24.7 billion won in the quarter, up 143.1 percent from a year ago, driven by a royalty income of 16.9 billion won from license deals with Boehringer Ingelheim, Janssen and Gilead.

CKD generated an operating profit of 48.5 billion won in the same period, up 139.5 percent from a year ago thanks to robust sales from prescription drugs. Sales of injectable pneumococcal pneumonia vaccine Prevnar more than quadrupled to 53.7 billion won in the first three quarters.

Daewoong Pharm was also performed well with an operating profit of 7 billion won in the quarter, up 150.8 percent from a year ago, driven by strong sales of hyperlipidemia drug Crezet.

In contrast, Hanmi Pharm reported an operating loss of 32.2 billion won due to a loss related to its cancelled license deal with Sanofi to co-develop diabetes drug efpeglenatide. But it expects to see improvement in earnings soon because Sanofi-related costs won’t be reflected in its income statement any more starting the fourth quarter.