이미지 확대
South Korea may fall behind China in lithium-ion battery as early as this year despite its heavy investments to groom the power for electric vehicles, smartphones and energy storage systems as future mainstay growth for the Korean, given the fast ascension of patents applied by Chinese innovators, according to a report from the Korean Intellectual Property Office (KIPO).

The report exclusively obtained by Maeil Business Newspaper on Monday also show that Asia’s fourth largest economy is getting behind advanced countries in the development of a suite of cutting-edge technologies, including hydrogen science pushed hard by the Moon Jae-in administration, in terms of patent counts and citations.

The most vulnerable sector is lithium-ion battery, where Korea has run second behind Japan in the number of global patent applications. But China has made fast ascension over the past five years and is likely to catch up this year or early next year.

Patent counts can be a bellwether to predict China’s overtake of Korea in a market share fight in forthcoming years from the experience with the liquid crystal display (LCD) panel market. Korea was once the world’s largest producer of LCD panels but lost its market leadership to China in 2017. That happened just six years after China overtook Korea in terms of LCD patent applications in 2011. In 2018, China also beat Korea in the global market share of LCD TV with 31.9 percent versus 30.6 percent.

This analysis has grave implications to Korea, raising the need of a preemptive measure, said KIPO Commissioner Park Won-joo, suggesting that Korea should ward off competition from China by making headway in the field of solid-state battery and lithium metal electrodes, which are promising technology in next-generation battery science. 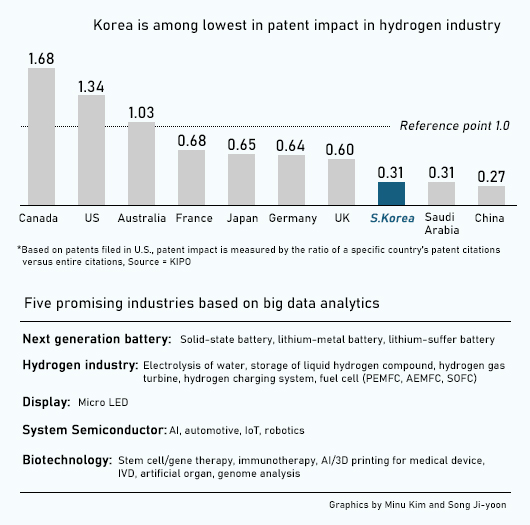 이미지 확대
Korea already slipped behind China in annual patent filings for OLED and quantum dot display technologies in 2017 and 2016, respectively. Given the past patent and market share dynamics, Korea is very likely to see a shakeup led by China soon also in these areas. Moreover, Korea stays behind the United States and China in patent filings related to next-generation display technology micro LED with 14.4 percent vs 51.9 percent combined.

In hydrogen economy, one of the future growth engines designated by the Moon government, Korea is falling behind advanced economies in terms of patent counts and citations.

Among the five industrial sectors analyzed in the report, Korea was ahead of others in system semiconductor. In particular, Korean patent filings for AI and IoT chips accounted for 34.3 percent and 49.9 percent, respectively, above the average of major countries (18.6 percent in AI and 41.2 percent in IoT). However, citations of Korean patents in emerging automotive semiconductor technology were trivial.

Network and clustering analysis methods were used to figure out Korea’s strength and weakness based on patent filings and citations in the report, said Han Deok-won, head of the KIPO’s Intellectual Property Creation Strategy Team, adding the big data analysis results will be shared with private and public sectors to help build their R&D projects.

The report analyzed 821,865 available patent data in Korea, the U.S., China, Japan and Europe in five promising industries (next generation battery, hydrogen industry, display, system semiconductor and biotech) between 1999 and 2019.