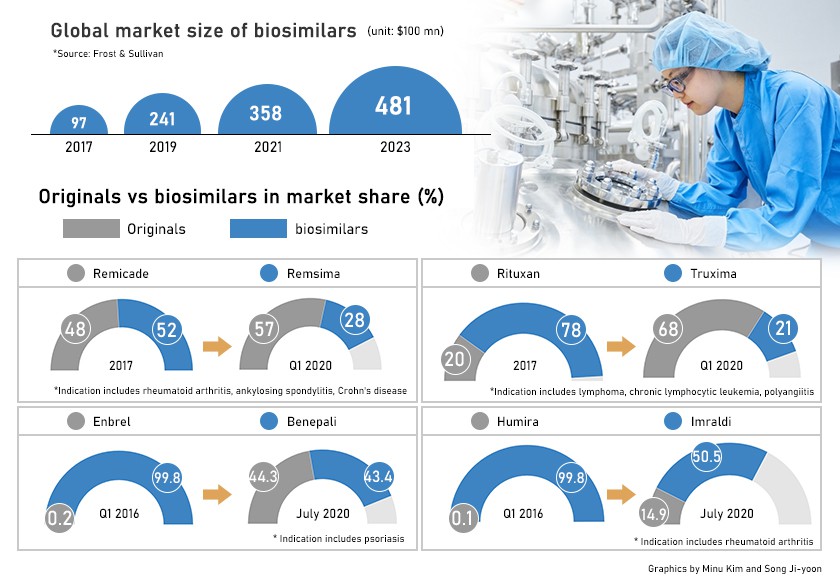 이미지 확대
Korean biosimilar brands from Celltrion Healthcare and Samsung Bioepis are expanding drug footprint across the world, with some already overtaking established reference medications in just three to four years after launch in the United States and Europe.

Celltrion’s biosimilar trios (Remsima, Truxima and Herzuma) have been remarkable in their European foray. Remsima, a biosimilar version of U.S. Johnson & Johnson’s blockbuster drug Remicade for the treatment of rheumatoid arthritis and other autoimmune diseases, already command a 57 percent share in Europe as of the end of March, pushing the original drug’s share to 28 percent. Blood cancer drug Truxima referenced to Rituxan hovered at nearly 70 percent in Europe. In contrast, Rituxan’s market share in Europe shriveled from 78 percent in 2017 to 21 percent in the first quarter of this year.

Herzuma referenced to Roche’s top-selling breast cancer drug Herceptin biosimilar took a 19 percent share in the first quarter, compared with 4 percent two years ago. Samsung’s Ontruzant, another Korean biosimilar brand against Herceptin, grew more than 10 times in Europe in the same period, whereas Herceptin’s position dwindled from 93 percent in 2018 to 55 percent in the first quarter of this year.

Samsung Bioepis’s key pipeline Benepali is now coming closely on the heels of its reference drug Enbrel (etanercept) of Amgen just in four years after its launch.

According to IQVIA data, Benepali accounted for 44.3 percent in Europe at the end of July, which is a quantum jump from 0.2 percent in February 2016. It already took the market leadership from Enbrel in Europe’s big five markets (Germany, France, UK, Italy, and Spain). Enbrel’s share in Europe stands at about 40 percent. Samsung Bioepis has so far generated 2 trillion won ($1.74 billion) in Europe since 2016.

K-biosimilar expansion is also evident in the U.S., the world’s largest pharmaceutical market. J&J’s Q3 global sales from Remicade reached $921 million, down from $1.62 billion in 2016, when Celltrion began to sell its Remicade biosimilar Remsima under the name of Inflectra. In the U.S. market alone, Q3 Remicade sales tumbled by 15.4 percent to $634 million from $749 million a year ago.

According to U.S. market tracker Symphony Health, Inflectra accounted for 9 percent of the U.S. market at the end of June, a nine-fold increase from 1 percent in 2017. Samsung’s Renflexis took 4 percent. In contrast, Remicade’s U.S. market share contracted from 99 percent in 2017 to 88 percent in the second quarter of this year.

Market watchers say it is a symbolic event that J&J`s Remicade monopoly is shaken due to Korean biosimilar makers, adding biosimilars will continue to grow as many countries actively embrace them because of price affordability over the same efficacy and safety profile.