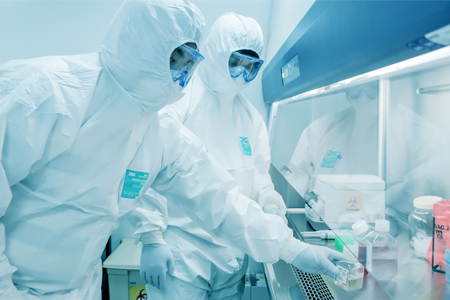 이미지 확대
Investor’ discretion is advised when investing in Korean bio stocks upon announcement of out-licensing deals with multinationals as Korean biopharma companies tend to overstate the milestone agreement, given the paltry advance payment they have received.

Korean pharma industry has signed out-licensing deals worth nearly 8 trillion won ($6.96 billion) with global partners this year, but their upfront payment accounted for a mere 61.5 billion won, less than 1 percent of the total.

In the previous years, the average had been from 5 to 10 percent, according to sources on Monday.

The discrepancy may stem from the tendency to talk up the deal despite the risk of its collapse in the process of development.

On Oct. 7, Korean biotech company OliX Pharmaceuticals announced a deal to license out its four RNAi ophthalmic treatments to France’s Théa Open Innovation. Under their agreement, Théa will have worldwide rights to develop OliX’ preclinical-stage OLX301A for the treatment of age-related macular degeneration (AMD) and OLX301D for subretinal fibrosis and AMD with two other ophthalmic pipelines upon exercise of the option. The deal value is worth up to 916 billion won but Théa’s upfront payment to Olix is just 21.6 billion won, or 2.3 percent of the total.

The disproportionately small amount of down payment is also seen in other companies. LegoChem Biosciences signed a deal worth up to $672 million in total with Britain-based Iksuda Therapeutics for its antibody-drug conjugate (ADC) platform in April and May, but their down payment was 6.1 billion won (0.7 percent). 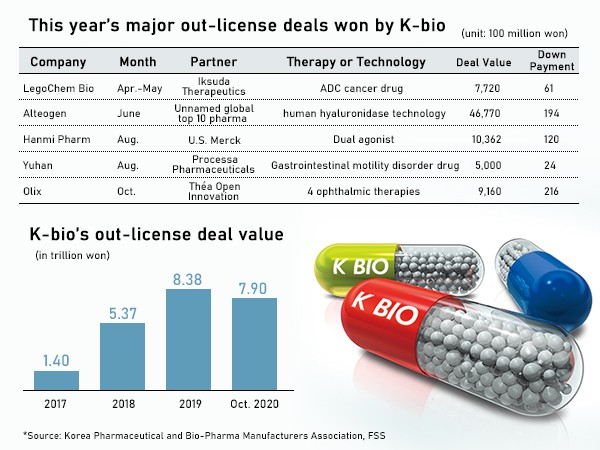 In June, Alteogen signed a nonexclusive license agreement with a top 10 global pharmaceutical company for its recombinant human hyaluronidase enzyme ALT-B4 in exchange for a whopping 4.67 trillion won but its up-front payment was 19.4 million, or 0.4 percent of its total contract value.

Hanmi Pharm, one of Korea’s largest drugmakers, announced a 1.03 trillion won deal to license out its investigational dual agonist to U.S. Merck in August, but its down payment was 12 billion won. Yuhan Corp. licensed out an investigational gastrointestinal motility disorder drug to U.S.-based Processa Pharmaceuticals in August in a deal to be worth over 500 billion won, with a down payment of 2.4 billion won (0.5 percent).

Market watchers say the small down payment may reflect a low possibility of success in the commercial development of candidate drugs, and their announcement of total milestone and royalty payments based on projections is premature. Nevertheless, they tend to show off total deal value partly because they want to attract market attention.

Experts point out there could be a risk of contract failure later. Global pharmaceutical companies are not feeling too much of a burden from small non-refundable payment. Hanmi has inked six out license deals since 2015, but five of them were misfired. Bridge Biotherapeutics signed a contract with Boehringer Ingelheim to license out its idiopathic pulmonary fibrosis but market watchers say the deal may not lead to successful royalty payment as a planned Phase 2 study faces an extended delay.