이미지 확대
South Korean biotech companies are seeking growth either through acquisitions or spinoffs as the coronavirus-driven health crisis fuels research and development in the drug industry.

Vivozon, a Korean biopharma focused on pain therapeutics, bought Inist Bio Pharmaceutical through its affiliate Lumi Micro last month. Inist is a midsize pharmaceutical firm that also specializes in the treatment of pain and central nervous system conditions. It posted revenue of 62.6 billion won ($53.9 million) in 2019.

Another local bio firm HLB LifeScience acquired a 17.19 percent stake in Mediforum Pharm for 14 billion won in September to become its largest shareholder. The move was aimed to bolster the production, marketing and sales force for its upcoming drug pipeline as part of efforts to become a global pharma company, according to HLB Lifescience.

In June, Korea’s biosimilar giant Celltrion agreed to buy the business rights of Japan’s Takeda Pharmaceutical in nine Asia-Pacific markets, including South Korea, Thailand and Australia. With the deal, Celltrion secured the patent, trademark and sales rights for 18 Takeda products.

Experts say biotech companies tend to invest heavily in new drug development, making it hard for them generate profit for an extended period of time. As many lack their own production facilities and sales networks, acquiring companies with the established infrastructure is seen as an attractive avenue for growth.

The prolonged coronavirus pandemic has been weighing heavily on small and midsize pharmaceuticals, which could also trigger further M&As in the market. 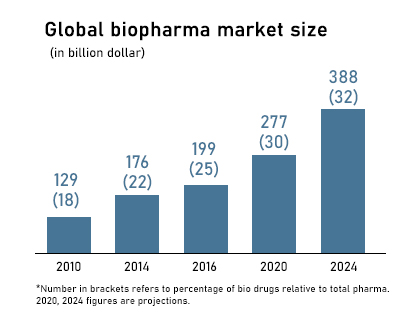 이미지 확대
Spinoffs are becoming another emerging trend in the local bio scene. Some companies are choosing to split off their new drug pipeline into a separate business, with an aim to accelerate drug development by channeling R&D resources.

Helixmith last month spun off its latest biotech R&D project into two new subsidiaries. Neuromyon would focus on gene therapies while Cartexell would develop CAR-T cell immunotherapy to treat solid tumors. The decision was made to better attract outside funds and drive its new pipeline development, according to Helixmith.

Crystal Genomics in July set up a wholly-owned subsidiary called Machaon Therapeutics to speed up the clinical trial of its new fibrosis drug CG-750. It is seeking to raise new funding by the end of the year to start clinical studies in the U.S.

Some bio firms are raising new capital to bolster their production facilities.

Binex, a contract development and manufacturing organization for biopharma firms, issued 50 billion won in convertible bonds and exchangeable bonds to ramp up its manufacturing capacity.

By Kim Si-gyun and Kim Hyo-jin