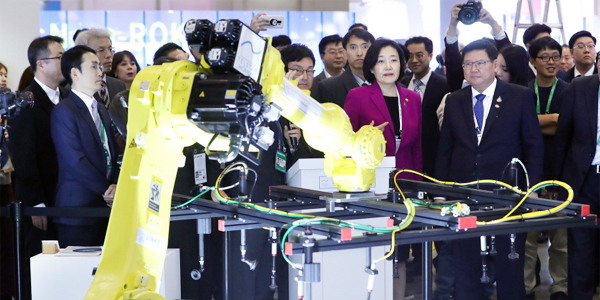 South Korean SMEs and Startups Minister Park Young-sun (second from right) and Thai Higher Education, Science, Research and Innovation Minister Suvit Maesincee (first from right) look at a co-op robot during a startup expo named ComeUp held on the sidelines of the Korea-Association of Southeast Asian Nations (ASEAN) special summit at the BEXCO exhibition hall in Busan on Monday. (Courtesy of Yonhap News)

South Korea and 10 Asian countries agreed to expand their cooperation to build the region as hotbed for startups.

The Korean government proposed to host ROK-ASEAN Startup Expo ComeUp on a regular basis. The event attended by 100 Korean and overseas startups was held on Monday on the sidelines of the two-day 2019 South Korea-Association of Southeast Asian Nations (ASEAN) Commemorative Summit in Busan, Korea.

Korean SMEs and Startups Minister Park Young-sun said the government proposed to create a startup organization among Korea and ASEAN countries. The ministry is scheduled to hold its first policy meeting with the ASEAN Coordinating Committee on MSME (ACCMSME) in Phnom Penh, Cambodia on Friday.

K-Startup Week ComeUp which is held in Seoul each year will join the ASEAN Startup program. The Korea Federation of SMEs, a trade association of small and medium-sized firms in Korea, held a forum on Korean and ASEAN startups on the same day.

ASEAN is home to successful startups such as Grab (ride-hailing service), Go-jek (ride-hailing service) and Tokopedia (e-commerce), said Dr. Vu Tien Loc, Chairman and President of Vietnam Chamber of Commerce and Industry (VCCI), adding that 70 percent of the entire population are 40 years or below in ASEAN countries and it is the best place for more startups to blossom with the fastest growing number of Internet users.

Bukalapak, an e-commerce company called `Amazon in Southeast Asia`, became a unicorn with a corporate value of $1 billion just seven years after its foundation in 2010. This year, the company’s value reached $2.5 billion after it received investments from Korea`s Mirae Asset Daewoo, Naver and Shinhan Financial Group. Qraved, an Indonesian food content startup co-founded by a Korean entrepreneur Kim Sung-hoon, is in the spotlight for its investment worth about 13 billion won from Korea Investment Partners and Richmond Global Ventures among others.