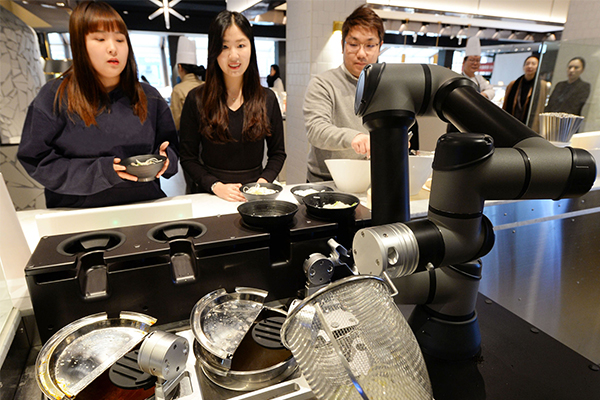 이미지 확대
South Korean family restaurant chain VIPS has deployed a robot chef that can make rice noodles, becoming one of the first to bring automation to the country’s eatery industry.

The company deployed the CLOi Chefbot at the renewal opening of its new premier VIPS store in Deungchon-dong, Seoul, its first outlet that opened in 1997.

The robot assigned to the Rice Noodle Station cooked up noodles for waiting customers in less than a minute. It expertly dipped the noodles and vegetables in boiling water, removed them in 30 seconds and drained them before placing the contents and broth in a bowl, ready to serve.

CLOi is the first robot to come out from the business partnership struck between CJ Foodville, the operator of VIPS, and LG Electronics in April. CJ Foodville said CLOi would help address safety concerns of some workers having to prepare food while serving customers. “The Rice Noodle Station was a highly demanding job that had a high risk of burn injuries as the chefs would constantly be working with hot water while personally serving customers.”

CLOi is the company’s latest effort to prop up the sagging family restaurant industry amid the rise of single households and the growing eat-at-home trend.

LG Electronics said the robot was equipped with its latest technologies to simulate the motions of a human chef, with their arms and hands designed to grasp different utensils, pots and dishes. “We plan to put out more robotic services that can be applied in the food industry,” it said.