Truxima to hit US market next week as first rituximab biosimilar 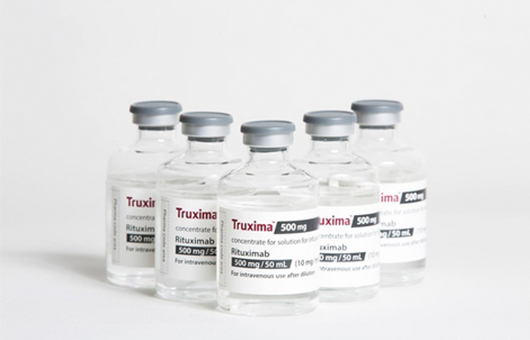 Truxima, a rituximab biosimilar developed by South Korea’s major biopharmaceutical company Celltrion, will debut in the United States next week, marking the first optional addition to the country’s clinical practice where only an original drug exists.

Celltrion Healthcare and its U.S. marketing partner Teva Pharmaceuticals said Thursday that Truxima will be available in the U.S. from Nov. 11.

Truxima was approved by the FDA in November of last year to treat adult patients with non-Hodgkin lymphoma either as monotherapy or in combination with chemotherapy. Its reference drug is MabThera or Rituxan (rituximab) developed by Swiss pharmaceutical firm Roche.

The launch is significant as Truxima is the first mover in a treatment in the world’s biggest pharmaceutical market, said Celltrion Healthcare, the South Korean distributor of Celltrion biosimilars.

Its reference drug Rituximab’s sales in the U.S. amount to about $4.3 billion a year, 60 percent of the drug’s global sales.

Truxima is already penetrating the European market at a fast speed as a first mover. Celltrion aims to expand customer base in the U.S. targeting payors, hospitals, physicians and other key stakeholders.

Truxima was approved in February 2017 for European sales and first launched in Britain in April of the same year. The drug’s market share in Europe stood at 38 percent as of the end of June.

“We are pleased to announce the launch of the first rituximab biosimilar, Truxima, which is also the first oncology drug launched by Celltrion Group in the U.S.,” said Hyoung-Ki Kim, Head of Celltrion Healthcare, adding the drug will contribute much to the company’s organic growth.