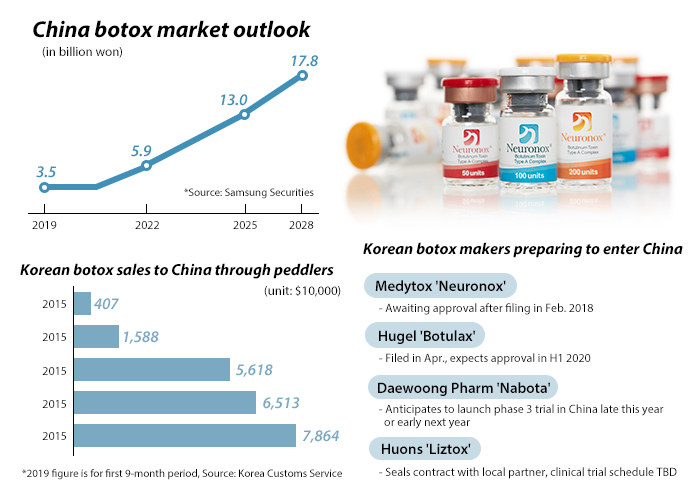 이미지 확대
The Chinese market proved to be hard nut to crack for Korean botulinum toxin producers whose entry has been stalled for nearly two years by China’s health authorities who appear to be buying time for local makers to catch up.

To date, only two botox products from U.S. Allergan and China’s Lanzhou Biological Preparations Institute have passed marketing clearance in the world’s second largest market of botox used for cosmetic purposes. Korean products are sold to China only through individual peddlers who cross borders to buy and sell items.

Medytox, Korea’s leading botox maker, filed for marketing approval on its product under the name of Neuronox in February 2018, but no reply has been received. The company said it has no idea the reason behind the delay and has no other option but to wait.

Recent upset by Korean authorities ordering Medytox to recall and discard some of its botox products licensed for exports questioning quality standards could have played a part.

The issue was also aired on state-run CCTV2, which contributes to a negative image of Korean products, an industry source noted.

Hugel, another Korean botox maker, applied for marketing approval of its Botulax in April and hopes for result in the first half of next year, but cannot be sure.

Daewoong Pharm received approval of a phase 3 study from China’s health authorities in January of last year, but its plan to complete the test within this year has been delayed. The company said it expects to begin the test early next year at the latest but has no idea when it will be cleared for further progress.

Huons, which launched Liztox in Korea in June, said its local partner has not developed a plan for launch in China.

In September last year, Huons signed a contract to give a Chinese beauty company a 10-year exclusive right to distribute its botox products across China in return for the process of commercial development and regulatory approval.