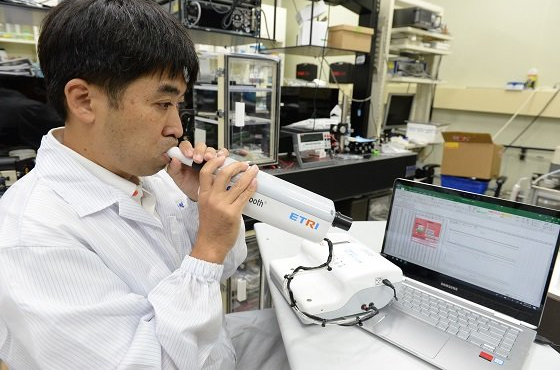 Inspired by the human nose that uses nerve cells to sense odors, the researchers developed the new sensor device that converts exhalation gases to specific electrical signals. Based on these signals, the system’s machine learning algorithm determines whether substances linked to cancer cells are contained.

To diagnose lung cancer, X-ray and CT scans are used normally but patients have risk of being exposed to radiation in addition to screening expenses.

The leading cause of death was cancer among Koreans last year, with the highest mortality rate among lung cancer patients.

The electronic nose system is about the size of a desktop computer. It consists of three parts: exhalation sampling unit, metal oxide chemical sensor module, and data signal processing unit. The inspection method is simple. First, the test subject`s exhalation is put in a plastic kit. When a carbon stick is put into the kit, the gaseous components that are released during breathing bind to the stick. The stick then goes into the electronic nose. When the system runs, the built-in sensor shows different electrical resistance depending on how much gas has adhered to it. By analyzing the data of the gas components and comparing them with exhalation data from lung cancer patients, doctors can help determine the presence of lung cancer.

The researchers collected exhalation data from 37 lung cancer patients and 48 healthy persons and created a data set after analyses 200 times. The detection accuracy was about 75 percent based on a machine learning model.