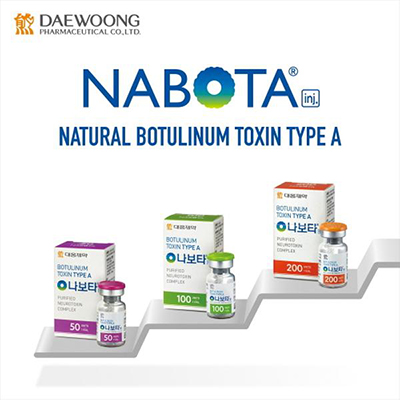 이미지 확대
Daewoong Pharm said on Wednesday its botulinum toxin Nabota has been used on more than 20,000 cases across the U.S. in less than 45 days after it hit the American market.

According to the South Korean pharmaceutical firm, Evolus, a U.S. performance beauty company and Daewoong Pharm’s local distributor for the product sold under the trade name of Jeuveau, said some 23,000 consumers completed J.E.T. Program surveys.

In May, Evolus launched Jeuveau with J.E.T., an exclusive program for aesthetic providers and consumers to be the first to experience the product, offering providers the opportunity to receive up to three shipments of Jeuveau.

Over 5,000 aesthetic accounts enrolled in J.E.T., and some 23,000 consumers completed multiple stages of the J.E.T. program including final surveys, where more than 70 percent of the respondents showed satisfaction.

Jeuveau sales reached $2.3 million for about 45 days to end-June and revenue generation gained speed given there were free offerings to clinics for promotion in the period, Daewoong Pharm said.

Driven by strong Nabota exports, Daewoong Pharm reported the largest quarterly sales ever in he second quarter. Operating profit surged 70.6 percent on-year to 17.1 billion won ($14.1 million) over sales of 263.4 billion won, up 10.6 percent from a year ago.