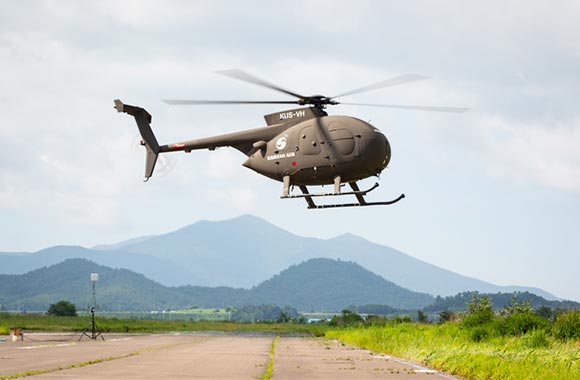 The KUS-VH, an unnamed variant of the U.S.-made MD500 light attack helicopter, hovered 10 meters above ground for about 30 minutes at a testing ground of Korea Aerospace Research Institute in Daejeon, South Korea on Tuesday, the company said.

Korean Air has worked on the development as part of a state-led defense program since 2014. It plans to gather feedback from customers until the end of 2021 to update flight range, altitude and other performance factors.

Korean Air said it obtained a special airworthiness certification from the Defense Acquisition Program Administration for the latest flight after a series of remote maneuvering assessments and aviation safety tests.

The 500MD unmanned chopper is equipped with advanced pilot systems, including an aviation control computer, integrated navigation, propulsion and electro-mechanic rotor controllers. It can stay aloft for six hours and carry up to 440 kilograms. With further development, the helicopter will be upgraded to carry out more missions including day and night time surveillance, the company said.

Unmanned helicopters can serve both military and civilian purposes, supplying cargo to battlefields or delivering packages. Retired models can also be easily armed, making them a cost-effective air asset.

Korean Air in 1976 was the first in the country to start producing 500MD helicopters for military use. It has since supplied a number of aircraft to the Korean military, such as the F-5 fighter jet and UH-60 helicopter fleet.