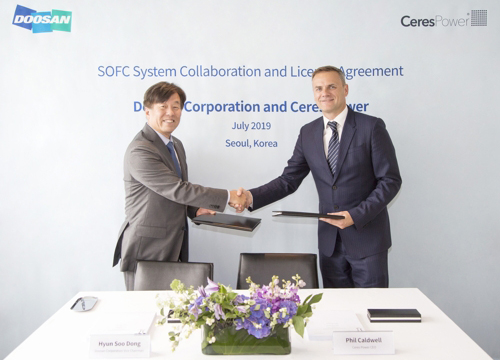 Ceres Power founded in 2001 holds patented next-generation SOFC technologies including mid-temperature cells and stacks. It is expanding business in alliance with Bosch and Nissan.

A fuel cell is a device that generates electricity by electrochemically reacting hydrogen and oxygen in the fuel cell stack. It is regarded ideal for distributed generation because it has less carbon footprint and a smaller space for installation compared to conventional thermal power generation. A solid oxide fuel cell produces electrical energy by oxidizing hydrogen as fuel.

Doosan Corp. offers both PEMFC and PAFC. PEMFC devices are used for houses and commercial buildings and PAFC for power generation. Doosan is the world’s largest manufacturer of fuel cell devices based on PAFC technology. It aims to garner new orders worth 1.3 trillion won ($1.1 billion) in power generation systems with sales of 500 billion won.

SOFCs for commercial buildings use electricity and heat generated by in-building fuel cell devices. SOFCs have higher power generation efficiency and its catalyst is cheaper than other fuel cells.

The two signed a collaboration and licensing agreement to jointly develop SOFC power systems targeted at the Korean commercial buildings market, in which the two see business potential alongside the Korean government’s plan of increasing the use of fuel cell electric systems in autos, factories and buildings.