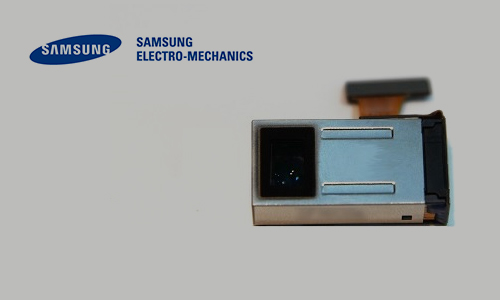 The optical zoom function helps increase the visibility of an object by adjusting the focal length of two or more lenses. To get a higher level of optical zoom, however, it is necessary to secure the distance between image sensor and lens array, which makes the smartphone surface unnecessarily protruding.

Samsung Electro-Mechanics addressed this protruding camera issue by applying the principle of reflecting the light in a periscope. The company arranged sensors and lenses sideways to reduce the thickness and further extends the focal distance by 2.5 times. It also ditched the typical round shape in lens design to further reduce the thickness. As a result, the company successfully developed a 5x optical zoom module with a thickness in the 5mm range, thinner than a x2 zoom module whose thickness is usually 6mm.

Samsung Electro-Mechanics said its independent design and manufacturing of key parts such as lenses and actuators is able to provide differentiated offerings to customers.

The company is planning to expand cooperation with global carmakers to increase the supply of its refined camera modules for car electronics.