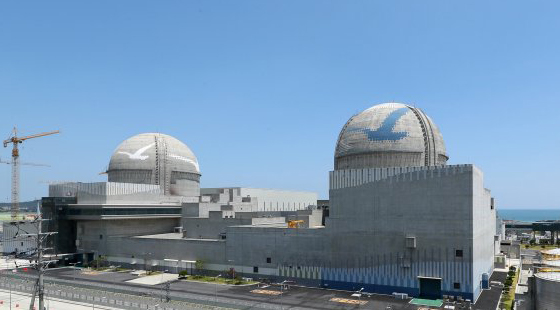 Pictured is the overview of the Shin Kori 3 and 4 reactors built on the third-generation pressurized water reactor ‘APR1400’ design. The Shin Kori 3 reactor came online in December 2016 and the operation of the Shin Kori 4 was licensed on February 1. [Photo by Korea Hydro and Nuclear Power]

The United States has certified the Advanced Power Reactor 1400 (APR1400), a next-generation commercial nuclear reactor design independently developed by Korean state-owned companies Korea Electric Power Corp. (KEPCO) and Korea Hydro and Nuclear Power (KHNP), paving the way for exports of Korean indigenous reactor technology to the U.S. and delivering a major boost to the industry that has been grappling with phase-out policy at home.

This is the first time that a nuclear reactor design developed outside the U.S. has been certified in the U.S.

The Nuclear Regulatory Commission (NRC), the U.S. nuclear regulatory body, said in its website on Apr. 30 it will issue a direct final rule certifying the reactor type as fully acceptable for U.S. use for 15 years. The two companies submitted an application on Dec. 23, 2014 for certification. Absent adverse comments, the rule will become effective 120 days following publication in the Federal Register, the NRC said. The rule will go into effect sometime at the end of July after a legislation process.

The APR1400 came online in December 2016 at Shin Kori 3 in South Korea, and was applied to Shin Kori 4 after an operational license last February. It is designed to work for 60 years and endures an earthquake with a magnitude of up to 7.0. Four APR1400 reactors are under construction in the United Arab Emirates (UAE).

The NRC’s full certification means the design has no problem when building and operating a nuclear power plant in the U.S. The NRC said the APR1400 features enhanced systems to safely shut down the reactor or mitigate the effects of an accident.

The certification raises expectations that Korea will be able to increase its competitiveness in the global nuclear reactor market and export follow-up models after the UAE deal.