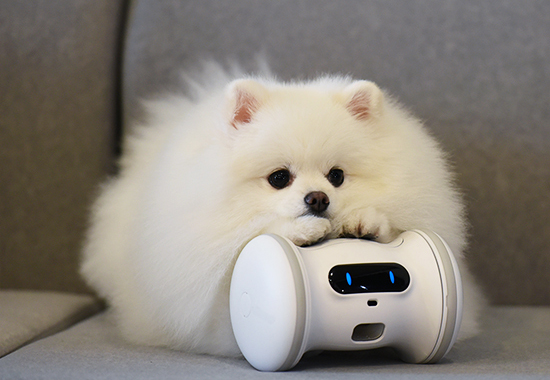 The burgeoning pet industry in South Korea has emerged as another promising market for startups with expertise in artificial intelligence (AI) and robotics.

Korean startup Varram System Co. recently released Pet Fitness Robot, an artificial intelligence (AI) robot that looks after pets at home when their owners are away. The robot, via mobile application, keeps pets active and gives snacks at a pre-set time, allowing their owners to leave home without worrying about their pets at home.

Fitpet Inc., another startup founded in 2017 by a former Samsung SDS Co. engineer, has developed a urine test kit for pets. The kit allows pet owners to analyze urine test via mobile app and check for more than 10 types of diseases. The company has also developed the world’s first nose print recognition technology for pets, which has drawn attention from insurers offering pet insurances. Fitpet is expected to top 10 billion won in sales this year.

With an increasing number of startups joining the pet industry, petconomy, a newly coined word that combines pet and economy, has emerged as a hot industry area.

According to Korea Rural Economic Institute on Friday, the country’s pet market, including medical and insurance sectors, is expected to reach 3 trillion won this year, double the size of that in 2014. The industry is forecast to grow to 4.5 trillion won in 2023.

The boom in the pet industry in Korea is largely attributed to an increasing number of single- and two-member households who are showing interest in owning pets as their life-long companion. About 14 million Koreans are estimated to be living with pets amid low birthrate and rapidly aging society. Data from Animal and Plat Quarantine Agency showed that 28 percent of Korean families live with pets.

To meet the growing demand for pet related services, the Korean pet market has rapidly expanded beyond traditional pet business such as pet medical services or pet foods. Now the country is bracing for the growth of the pet medical insurance market, pet taxi services and robotic pet care services. And many local startups are taking center stage by integrating new technologies such as AI and Internet of Things to offer pet owners a wide range of services.

By Park Eui-myung and Lee Eun-joo