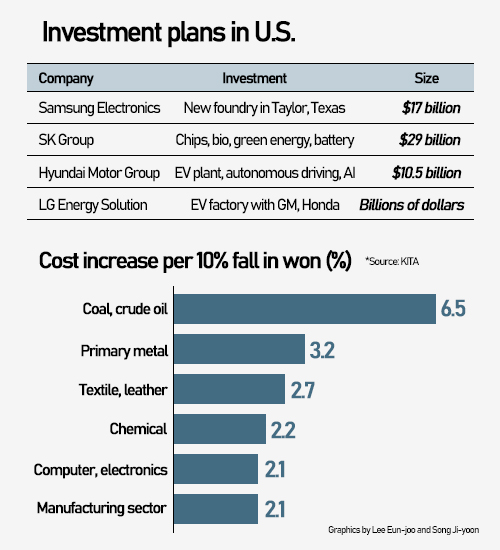 이미지 확대
South Korea’s household conglomerates eagerly indulged the U.S. president on Buy American campaign with multibillion-dollar long-term investment pledges in the United States, but whether they could live up to their commitments immediately remain uncertain due to super-strong greenback.

The capex plans in the U.S. pronounced this year by the country’s four business groups amounted to $56 billion.

Samsung Electronics is building a $17 billion next-gen foundry in Taylor, Texas, to start mass production in latter 2024. SK Group pledged $29 billion investment plan in chip, battery, and bio in in July during a virtual meeting between its chairman Chey Tae-won and U.S. President Joe Biden.

Although LG Group did not present an investment plan in the U.S. in group-wide plan, its battery flagship LG Energy Solution is building the largest battery sites across the U.S. alone and in joint ventures with General Motors and Honda.

The top-tier Korean companies would be able to raise funds, given its focus on U.S. strategic industries, but the jump in financing cost due to jump in U.S. interest rates and greenback value could affect their plans.

The series of Buy American legislations have also raised costs for Korean companies as they would have to source larger manpower and materials from North America.

The dollar hovering at 13-year high against the Korean won would weigh down on their profits due to higher costs of materials to go into their exports.

Korean refiners that pay for crude imports in greenback lost more than 1 trillion won ($710 million) in exchange rate losses in the first six months of the year. Refiners buy crude on credit and make payment three to four months later. Further weakening in the won causes losses despite hedging.

“Half of the crude we import are exported back after refining, and the weaker won has made import cost higher to affect profit,” said an unnamed official from Korea Petroleum Association.

A weak won has done more damage than good for petrochemical exporters due to softening in demand in key markets of the U.S. and China. The cost of naphtha imports has gone up, but inventories have been piling up due to slowed demand. They have begun to adjust down output to deal with inventories.

The aviation industry has not been able to enjoy normalization in passenger flights due to restrained travels from jump in ticket prices due to strong fuel prices. Airliners are heavily affected by the exchange rate fluctuations as they make payment for fuel, lease, and sky usage fees in greenback.

Steel manufacturers already brace up for deterioration in their income statement.

Korean steelmakers import iron ore, coal and other raw materials for production. Yet they cannot fully translate the cost onto selling prices due to reduced demand.