USD-KRW above 1,400, 3-yr bond at 4% as Korean markets panic on tightening speed 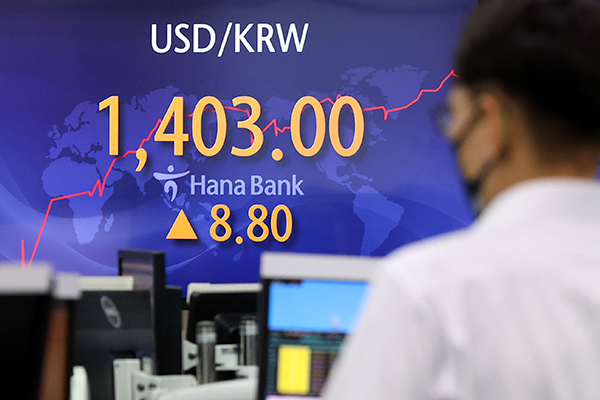 South Korea will respond with a “broad and long perspective” to the local market repercussions from a “lengthier and stronger than expected” U.S. tightening cycle, while taking “timely” actions to stabilize the capital markets, vowed fiscal and monetary authorities after the Korean won and debt value crashed to 13- and 12-year lows, respectively, Thursday.

The Korean currency lost 15.5 won to close at 1,409.7 won against the U.S. dollar in sync with other Asian currencies, which are in tantrums over the overnight hawkish comments from the U.S. central bank chief. The last time the dollar broke above 1,400 won was in May 2009.

Deputy Prime Minister and Minister of Economy and Finance Choo Kyung-ho held an emergency meeting with Bank of Korea and Financial Services Commission chiefs and discussed "the best policy mix” to sustain “volatile times that would last at least through next year,” according to a statement from the finance ministry.

“We will thoroughly monitor and manage the detailed variants affecting the dollar-won exchange rate,” Choo said.

The comments suggest authorities may condone the won dipping below 1,400 or lower as market experts now even see 1,500 over entrenchment of dollar strengthening. 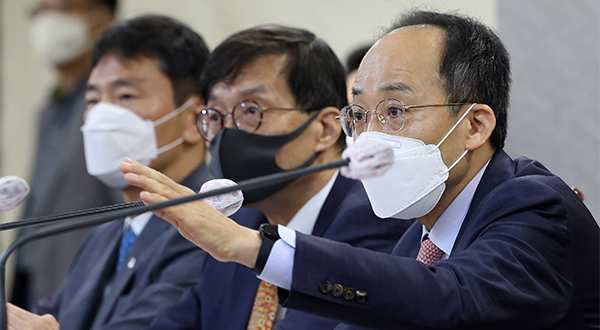 Other FX experts at the WKF sessions agreed that the strong dollar trend will continue as long as the rate increases and the Fed`s fight with inflation go on.

The government will meanwhile scrutinize pension funds and other institutional investment activity in overseas assets, as well as address difficulties of foreign fundraising by traders for “diverse” actions to ease FX supply and demand, the statement added.

The government and Bank of Korea will “aggressively seek out available means” to calm the debt market through policy cooperation.

The bond bias has titled toward faster rises in the Korean rates to match the galloping pace of the U.S. rates as the Fed has indicated another three-quarter point increase in November meeting after delivering the third hike of 75 basis points on Wednesday to place its the key rate at a range of 4.25 to 4.5 percent by the year-end.

Bank of Korea Governor Rhee Chang-yong, who had earlier projected rate increases in the modest 25 basis points, indicated Thursday the bank`s scope could widen to 50 basis points in the next BOK rate-setting meeting in October.