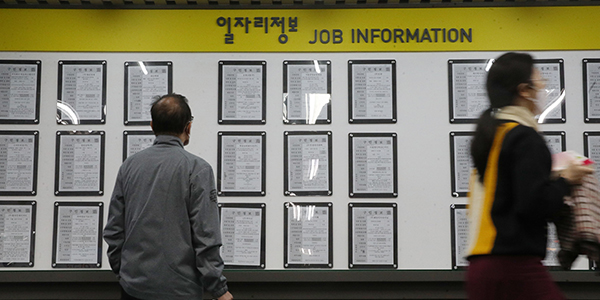 South Korea added more than 800,000 jobs in July from a year ago in the fastest pace for the month in 22 years but the job growth pace slowed for the second straight month amid growing economic uncertainty.

According to data released by Statistics Korea on Wednesday, the total number of employed stood at 28.48 million in July, up 826,000 from the same period a year ago. It is the largest figure for the month since 1.03 million on-year job additions in July, 2000.

The number of employed has increased for the 17th month in a row in July since March last year. The growth pace, however, has slowed for the second month from an on-year increase of 935,000 in May and 841,000 in June.

The Korean government forecast the slowdown in growth will continue throughout the year. In a separate release, the Ministry of Economy and Finance projected Korea’s job growth to gradually slow down amid downward pressure from the ongoing monetary tightening across the world, Covid-19 resurgence, and subdued consumer and corporate spending.

By industry, the manufacturing sector added 176,000 jobs in July, the largest on-year growth since 182,000 in November 2015. The strong addition was led by improved chip supply and exports. The healthcare and social welfare service sector added 130,000 jobs in July from a year-ago period, information and communications 95,000, agriculture, forestry and fishery 93,000, professional, science, and technology service 86,000, and accommodation and restaurant 54,000.

Employment in association, organization, and other individual service industry, on the other hand, declined 23,000, financial and insurance 21,000, and wholesale and retail 10,000. 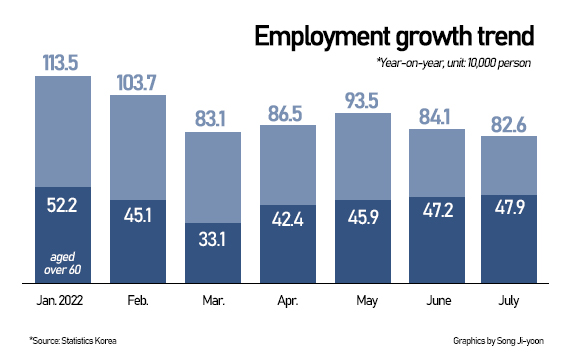 The number of self-employed with paid hires climbed 78,000 and those without 49,000, data showed.

The employment rate of people aged 15 and older rose 1.6 percentage point to 62.9 percent in July, the highest for the month of July since the agency began compiling related data in 1982.

The economically inactive population reached 15.9 million, down 575,000 from a year ago.