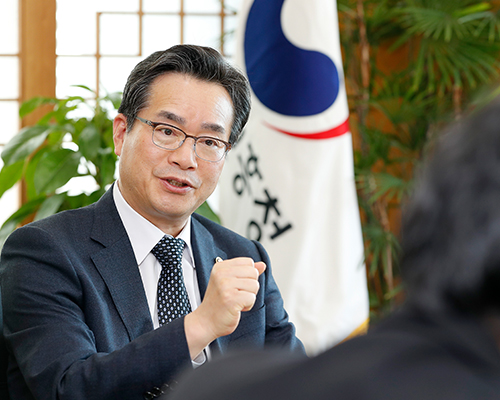 이미지 확대
Seoul will up government grain reserve and overseas networks while improvising what can be done to survive strong grain prices that are likely to persist into next year, said Chung Hwang-keun, the Minister of Agriculture, Food, and Rural Affairs.

The government is devising grain readiness for lengthened surge in grain imports and repeated food challenges from climate changes, he said Wednesday at the Maeil Business Economist Club forum.

International grain prices have been hitting record highs. According to the International Grain Council (IGC) and the Chicago Mercantile Exchange (CME), the price of rice per ton jumped from its average price of $923 per ton to $1,439 in June this year, wheat from $187 to $386, soybeans from $337 to $624, and corn from $154 to $302. The prices of the staples have all been doubled from the levels of a year ago due to the protracted war between the global breadbaskets – Russia and Ukraine.

The Ministry of Agriculture, Food, and Rural Affairs plan to increase grain stocks and facilities for longer storage.

The ministry will up government stockpile of grains to three-months` worth from current two-month inventory and invest 90 billion won ($69.27 million) to increase low-temperature grain storage facilities from the current 14 to 17.

“We will back traders like POSCO International and Harim invest in infrastructure like grain terminals,” said Chung.

Starting next year, the government will lend funds at low annual interest rates of 1 to 1.5 percent to revitalize overseas investment.

Korea is the world’s seventh largest importer of grains due to low self-sufficiency. Apart from rice, it relies entirely on imports for grain staples.

The low food self-sufficiency rate can be attributed to the loss of farmland and the diversification of consumption. The total area of farmlands nationwide in 2020 amounted to 1.56 million hectares, down 31.9 percent from 2.298 million hectares in 1970.

While rice consumption fell, demand for wheat and meat increased on the westernization of food. Meat consumption that stopped at 5.2 kilograms per person in 1970 averaged 52.5 kilograms in 2020.

Chung suggested rice flour, or rice powder, as the immediate means to bolster the low food self-sufficiency rate. Unlike traditional rice, rice flour is more easily processed because it is in powder form. Chung plans to use government funds to purchase all of the rice flour produced to boost the rice flour industry. It will then send it to companies such as CJ CheilJedang, Nongshim Flour Mills, and Orion-Nonghyup so that they can develop new rice flour products.

Chung also stressed that land preservation was a key component of food security and that consumption patterns needed to be changed as around 30 percent of the food produced in Korea becomes waste.