USD-KRW breaks 1,300 for the first time in 13 yrs despite intervention 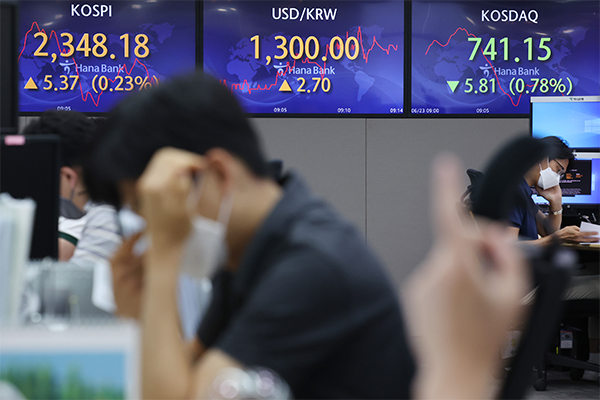 The South Korean won fell below 1,300 threshold against the U.S. dollar for the first time in 13 years, despite interventionist efforts from authorities, on multiple downside from continued foreign flight from Korean capital markets, yen’s downfall, and widening trade deficit.

The U.S. dollar rose 4.5 won to close at 1,301.8 won on Thursday, breaching above the 1,300 threshold for the first time since 1,303 won on July 14 2009. The admission of a recession consequence from fast tightening to battle inflation from U.S. Federal Reserve chair Jerome Powell fanned capital flight toward safer U.S. assets.

“We plan to take policy endeavors to ease the imbalance in market supply and demand,” he said.

Korea’s widening deficit in trade balance is another factor undermining the won.

According to Korea Customs Service, the country recorded a trade deficit of $7.6 billion in the first 20 days of June amid import surge due to a rise in raw materials prices. The country is expected to incur its biggest-ever six-month deficit by the end of June.

Korea International Trade Association projected Korea could report its first trade deficit in 14 years with nearly $15 billion in the red.

International confidence in the trade-reliant economy is also wavering.

The credit default swap (CDS) premium for Korea’s five-year foreign exchange stabilization bonds reached 47.82 basis points on Wednesday, widening to a level of March 2020 when the financial markets were rattled from the outbreak of Covid-19.