BOK delivers third hike in 5 mos in Jan, signals the key rate going up to 1.5% 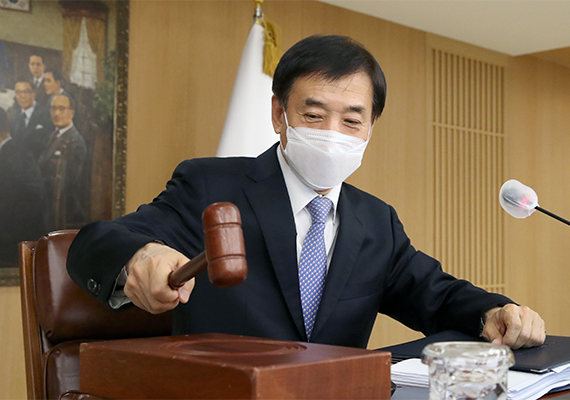 South Korea’s central bank has moved on with a third hike over a span of five months in January as inflation poses ongoing danger and plans to deliver at least one more increase as the economy could accommodate the base rate at “1.5 percent.”

“We have returned the policy rate to pre-Covid level of 1.25 percent… but we may have to take additional action” to respond to inflationary pressure and financial imbalances,” said Bank of Korea (BOK) Governor Lee Ju-yeol Friday after this year’s first monetary policy meeting that delivered a back-to-back increase for the first time in 14 years.

“Even when the key rate hits 1.5 percent, it cannot be deemed monetary tightening,” he said.

The BOK raised the base rate by 25 basis point to 1.25 percent in a back-to-back hike after last action in November.

The BOK was among the first central banks to start lifting interest rates from zero territory in the face of inflationary pressure on surging commodity prices by hoisting up the key rate in August from the record-low 0.5 percent kept for a yearlong.

The tightening pace is the fastest since the lifting from 2.25 percent in July 2010 to 3.25 percent by June 2011 when the country and the world grappled with inflationary pressure amid recovery from the global financial crisis.

The wake of pandemic has been panning out similarly, but in faster recovery and inflation to speed up tightening response to ultra-loose fiscal and monetary actions across the world.

The U.S. is accelerating tapering and rate increases – possibly three to four this year from current 0.0-0.25 percent target range – and mulling reduction in balance account by selling treasury and securities holding to suck up liquidity after inflation rate in December hit 7 percent, the highest in nearly 40 years. 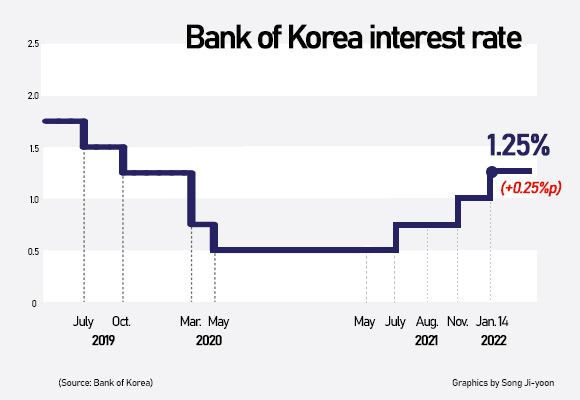 “Compared with a month ago, inflationary pressure is stronger and broader than we predicted,” he said.

The BOK estimates this year’s annual inflation rate to hover above last year’s 2.5 percent, the strongest in 10 years and above 2.0 percent mid to long-term target.

Lee disagreed with concerns of stagflation – increase in inflation while the economy is in slow motion – as the economy is expected to perform better than its potential, growing at 3.0 percent this year after an estimated 4.0 percent last year.

The market predicts the Korean benchmark rate to go up to 1.50 or 1.75 percent. But the BOK is not ready to shift to tightening position, he said to suggest restrained increases beyond 1.50 percent.

The BOK holds next monetary policy board meeting on February 24.