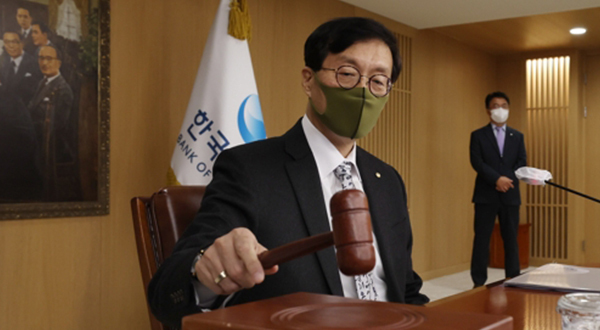 South Korea’s base rate has gone up to a 11-year high of 3.25 percent in inflation-hit 2022 in the fastest tightening campaign, and will head higher next year, albeit in much restrained pace to up to 3.5-3.75 percent as the economy is expected to perform its weakest since crisis times, according to the Bank of Korea chief.

“For the end target, members of the board have been mixed. There were three who pointed to 3.5 percent, one to 3.25 percent, and two opting to leave the upper room higher from 3.5 to 3.75 percent,” Governor Rhee Chang-yong told reporters Thursday after he chaired this year’s last rate-setting monetary board meeting with a 25 basis point raise.

The base rate bumped up almost uninterruptedly since lifting began in August last year has reached the “upper tip of the neutral level,” said Rhee suggesting pleateau in the rate action as conditions have changed from October when the rate was hiked by 50 basis points with the U.S. dollar running above 1,400 won for the first time since spring of 2009.

When the BOK would stop lifting rates depends on U.S. rate movements and other factors, but reversing the course would only take place after inflation returns to the target range of 2 percent, he said to imply the benchmark rate keeping at around mid-3 percent throughout next year, when inflation is expected to hover at 3.6 percent.

Bond prices rose on expectations for slowing in tightening pace. The three-year government bond yield fell 10 basis points to 3.739 percent by midday and 10-year yield 13 basis points to 3.64 percent. (Bond yield and price move in the opposite). The widened gap with U.S. has not disturbed stock and currency markets. Kospi rose 0.9 percent and Kosdaq 1.6 percent, while the dollar plunged 1.85 percent to 1,327.00 won.

Korea’s benchmark rate whose lifting begun in August last year from a record low of 0.50 percent has since been yanked up by 275 basis points in the fastest tightening in history. It went up by 2 percentage points this year alone with hikes made seven out of eight monetary meetings including two unprecedented increases in a half a percentage point. 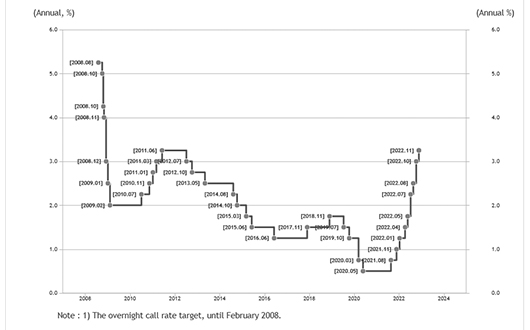 Base Rate Graph [Captured from BOK]

The BOK was anticipated to keep up the raise in 50 basis points this month, but the mood changed upon data showing signs of peak-out in inflation and expected inflation while economy has been quickly losing steam from sluggish exports and domestic demand.

Korea’s consumer price index (CPI) rose 5.7 percent year over year in October, easing from the peak of 6.3 percent in July.

The U.S. Federal Reserve on Nov. 2 delivered the fourth straight hike in 75 basis points to put the target range at 3.75 to 4.00 percent. It is projected to keep up increases to end the range above 5 percent next year.

Although too wide a gap with U.S. rates can be risky, “domestic factors” come before the “Fed influence,” Rhee said.

Even at the risk of stoking capital flight from widened gap in the rates, monetary authorities no longer can afford to keep up with the U.S. due to rapidly worsening macroeconomic data.

Exports fell in the double digit of 16.7 percent in the first 20 days of November. Outbound shipments fell 5.7 percent on year in October in the first decline in 2 years. Trade deficit has hit record high of $40 billion so far this year.

The consumer survey for November showed the index for consumer prospects for housing prices at an all-time low of 61 as the housing market - a core part of domestic demand - has come to a standstill from spike in borrowing rates. Consumer spending also has been lethargic due to higher interest burden on highly leveraged households. Korea’s household debt as of September hit new peak of 1,870 trillion won ($1.4 trillion) as credit-based purchases jumped on waning affordability.

Outlook for next year is worse.

The Bank of Korea (BOK) on the same day issued the gloomiest yet outlook for next year, cutting its estimate for next year’s growth to 1.7 percent from 2.1 percent in August.

The economy would be underperforming its mid-term growth potential of around 2 percent.

The last time Asia’s fourth largest economy performed so meagerly was pandemic-hit 2020 when the economy retreated 0.7 percent, in 2009 with a growth of 0.8 percent in the wake of global financial crisis, and in 1998 with a contraction of 5.1 percent while under international bailout from near-default crisis.

The BOK forecast the Korean economy to pick up to a rate of 2.3 percent in 2024 while maintaining this year’s growth outlook unchanged at 2.6 percent.

The BOK projected inflation to gain 3.6 percent next year, slightly lower from earlier forecast of 3.7 percent in August, but still a stretch over 2 percent target. Annual inflation estimate for this year was also revised slightly down from 5.2 percent to 5.1 percent.

“Looking ahead, it is forecast that consumer price inflation will somewhat decrease due to the base effect and the economic slowdown, but will remain high at the 5 percent level for some time,” BOK said in a statement.

The next and first of eight BOK rate-setting meetings for 2023 will be on Jan. 13.

By Lee Eun-joo and Hye-seung Seo