South Korea’s payroll increased by the biggest scope in seven years in September while the unemployment was the lowest for the month in eight years as the economy gained life in line with the pickup in vaccination and record exports.

According to data released by Statistics Korea on Wednesday, the number of employed reached 27.68 million in September, adding 671,000 from the same month a year earlier. It is the largest job growth since 726,000 in March 2014.

The job data has been rising since March. The pace of growth picked up last month after slowing for the fourth consecutive month in August amid summer outbreak that placed the country under after-dark lockdown.

Healthcare and social welfare service sector gained the most 280,000 jobs in September, followed by logistics and warehousing 163,000 and education service 98,000.

Employment in accommodation and food service sectors hardest hit by Covid-19 bounced back to growth after two months of declines, adding 39,000 jobs on year.

Chung Dong-myung, head of social statistics planning at Statistics Korea, attributed the strong recovery in the accommodation and restaurant sectors to the easing of restrictions on gatherings, Covid-19 stimulus checks, and vaccine rollout. 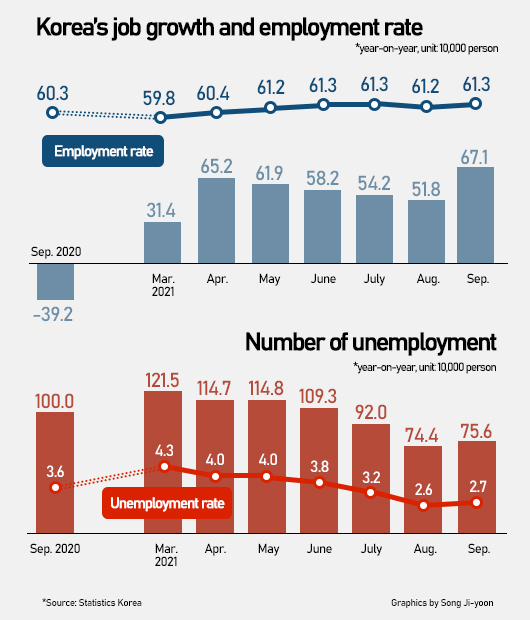 이미지 확대
Finance Minister Hong Nam-ki also agreed that the recovery in the country’s job market has become “evident,” saying that job growth in the private sector has significantly improved.

All age groups except those in their 30s reported job growth.

The employment rate for those aged 15 years and older rose one percentage point to 61.3 percent.

A total 756,000 people were unemployed in September, down 244,000 from a year earlier. The unemployment rate fell 0.9 percentage point to 2.7 percent, the lowest in the month in eight years.

Economically inactive population that are neither working nor actively seeking jobs fell 132,000 to 16.68 million, falling for a seventh straight month.