Memory boom expected to fizzle out faster than expected Q4 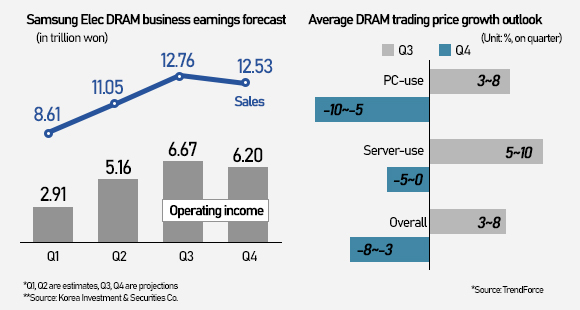 이미지 확대
The super cycle in memory chips is likely to be shorter-lived than expected with projection of DRAM prices falling 3 to 8 percent in the final three months of the year from the previous quarter, boding badly for Korea memory giants responsible for more than 20 percent of the country’s exports.

According to latest forecast by Taiwanese market tracker TrendForce, the average selling price of DRAM chips could fall 3 to 8 percent across the board in the October-December period from the previous three months.

TrendForce noted that DRAM suppliers are “generally carrying a healthy level of inventory” while most of their clients including smartphone manufacturers in the end-product markets “are carrying a higher level of DRAM inventory than what is considered healthy, meaning these clients will be less willing to procure additional DRAM going forward.”

Chip market data providers including TrendForce previously had warned that memory chip prices would peak in the third quarter and soften in the fourth quarter. But since the forecast has been restricted to DRAMs for personal computers, the outlook for Korean memory majors Samsung Electronics and SK hynix had stayed stable as their DRAMs mostly go to power servers.

But softening is now projected to pan out deeper and broader.

TrendForce projected PC-use DRAM prices to fall up to 10 percent in the fourth quarter, much faster than 5 percent estimated in September. Server DRAM prices are also forecast to decline for the first time this year by up to 5 percent, it added.

Unlike earlier forecast, American and Chinese IT companies have stockpiled chips in the first half and some of them have an inventory to last for more than 10 weeks.

According to memory market analysis firm DRAMeXchange, the average spot trading price of PC DRAM (DDR4 8 gigabyte) reached $3.72 per unit, declining over $1 in the last two months. The price fell 29.7 percent from this year’s peak of $5.3 in March.

Korean chipmakers would be safe for the third quarter. 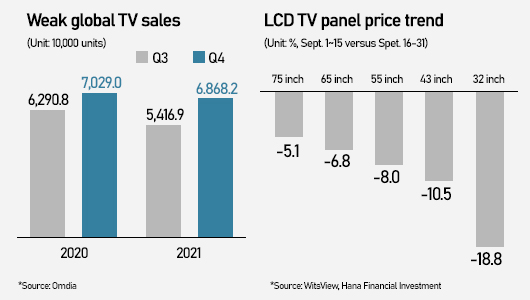 이미지 확대
According to financial market tracker FnGuide, Samsung Electronics is projected to report 15.7 trillion won ($13.4 billion) in operating income in the July-September period on sales of 73.13 trillion won to mark quarterly revenue milestone of more than 70 trillion won for the first time.

SK hynix’s operating income for the third quarter is estimated at 4.1 trillion won on sales of 11.75 trillion won.

Their outlook beyond the third quarter is, however, foggy.

Shinhan Investment Corp. in its latest report projected a short-term correction in the chip cycle, finding DRAM inventory increase at IT firms had been driven by chip supply shortages rather than the demand shortage.

“The current cycle should be seen as an extraordinary cycle due to Covid-19,” it said. “Prices are expected to see short-term correction before resuming the mini (upward) cycle.”