이미지 확대
An education and work system focused to a “contributing justice” and social appreciation towards the contribution to the common good can help alleviate many of the inequalities the world commonly faces today and the future, according to renown guru on justice and Harvard University professor Michael Sandel.

“The dignity of work consists of the sense of contributing to the work we do for the community good and how the community honors and appreciates the contribution to the common good,” said the professor as he addressed the global audience on the opening day of the World Knowledge Forum Tuesday, connected online from the United States with the Seoul podium shared by Korean political leaders Song Young-gil and Lee Jun-seok, chairs of the ruling Democratic Party and main opposition People Power Party.

He questioned the effectiveness in social mobility mechanism and universities providing the ladder as higher education has become a kind of “sorting machine.”

Instead of focusing on the people scrambling over the ladder to success, he envisioned a society where the “dignity of work” is appreciated as broader, democratic way of contributing to the common good and where the society honors and respects the contributions through everyday participations like recycling and joining donations to resolve inequalities.

Governments, entrepreneurs, and intellectuals around the world must jointly muster wisdom in the face of increasing common challenges to the mankind – the pandemic and climate change havoc – of today and the unknown in the future, said Chang Dae-whan, Chairman of Maekyung Media Group, as he opened this year’s global debate platform earlier in the morning. 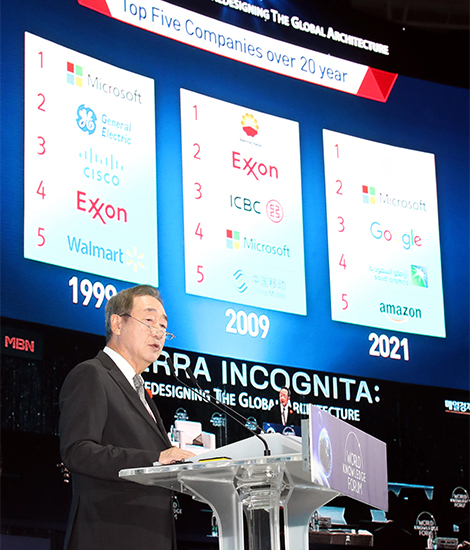 이미지 확대
“The human race was continuously affected by hunger, war, infectious disease and all sorts of many other crises, but we always managed to overcome these adversities and look for new opportunities towards a better future,” Chang said in his opening remark to Asia’s biggest intellectual forum running for three days from Tuesday online and offline under the theme of “Terra Incognita: Redesigning the Global Architecture.”

“No problem can be resolved by one single nation or one single company, so creating solid global cooperation networks will be the key to the success of our future.”

In his congratulatory message to the opening event, President Moon Jae-in anticipated this year’s WKF forum and theme devoted to the unprecedented challenges the world and Korea together face would serve as “the map and compass” in the unchartered path.

Welcoming former Secretary of State Mike Pompeo and Harvard University Michael Sandel and other speakers, Moon said the government together with the global audience would pay heed to their insights and discussions.

Other notable experts sharing insights toward the new goal include Michael J. Sandel, an American political philosopher and the Anne T. and Robert M. Bass Professor of Government at Harvard University Law School.

This year’s WKF is available through both online and offline sessions like last year. Fifteen free sessions including the opening ceremony and keynote speeches will be live-streamed on WKF’s YouTube channel and available on Naver TV, Twitter and Tik Tok Live as well.