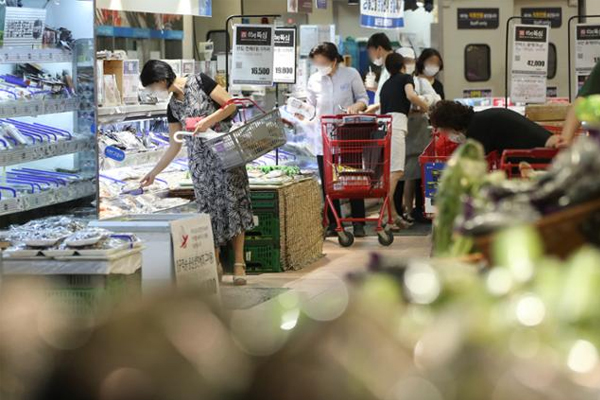 (Updated with market response and comments)

South Korea’s economy gained 0.7 percent in the second quarter from the previous three-month period led by state stimuli and private spending, trudging along the track to achieve the country’s 4.0 percent growth target for this year against strong Covid-19 headwinds.

According to the Bank of Korea’s preliminary growth data for the April-June period, the country’s gross domestic product added 0.7 percent from the first quarter, although losing steam from a 1.7 percent on-quarter gain in January-March.

Against a year ago, the GDP jumped 5.9 percent, the biggest on-year gain since 6.3 percent in the fourth quarter of 2010 upon rebound from the 2008-2009 financial crisis, as the figure went against 3.2 percent contraction in the second quarter of 2020 after Covid-19 developed into a pandemic.

Based on the preliminary data, the economy would have grown 3.9 percent in the first half.

Upon revising its annual growth estimate to 4.0 percent from 3.0 percent in May, the BOK projected the target is achievable if the second-quarter growth kept near to 0.7 percent. The economy must sustain tje growth pace at 0.7 percent to end the year at 4.0 percent.

Exports jumped 22.4 percent on year in the second quarter on stronger-than-expected demand in the U.S. and eurozone thanks to aggressive fiscal spending and vaccination rollouts in developed countries. But against the previous quarter, exports fell 2.0 percent.

Domestic demand picked up at a faster pace on a rebound in spending in line with the initiation of vaccine program.

Private consumption added 3.5 percent on quarter, accelerating from a 1.2 percent gain in the first quarter in the strongest rebound since 2009.

Government spending rose 3.9 percent on quarter, backed by supplementary budget on top of already record spending scheme for this year. Facility investment added 0.6 percent, slowing from a 6.1 percent gain in the first quarter. 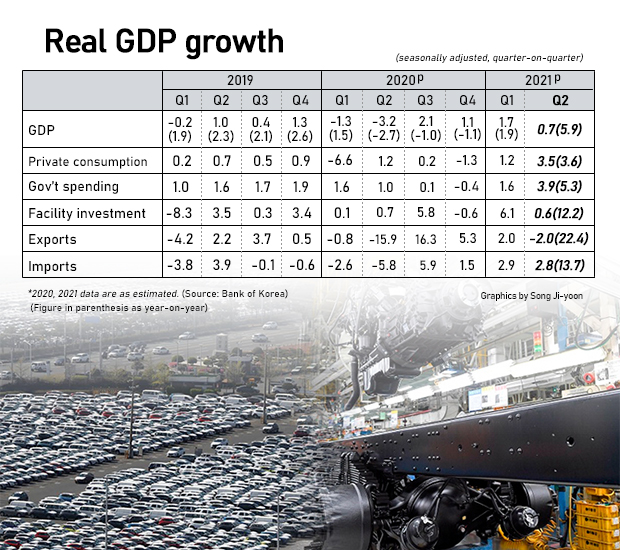 이미지 확대
The recovery pace in the second half, however, remains uncertain due to a record outbreak of Covid-19 cases that led to the country’s toughest-yet social distancing measures.

“The fourth wave of Covid-19 infections and the consequent tightening of social distancing rules have re-emerged as risks to the economy,” Deputy Prime Minister and Finance Minister Hong Nam-ki said on his Facebook page following the central bank’s GDP report.

The government plans to expedite aggressive spending to keep up the growth momentum.

Since the first extra budget of 14.9 trillion won is projected to have added 0.1-0.2 percentage point to first-half growth, the second and doubled spending could contribute more to growth in the second half, said Park Yang-soo, director general of statistics at BOK, brushing aside the concerns for a retreat in the growth pace on softening exports and the summer Covid-19 outbreak impact on consumption.